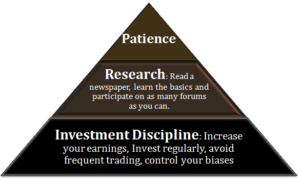 Let me assure you – No matter how positive (or negative) you are about something, there will always be much which will not be in your control.

There are things you cannot change and things that are totally in your control. The hard task is to understand the difference between the two.

When I started writing this post, the idea was to list in order of importance, habits which set apart successful investors from those who achieve substandard returns. Naturally, such a list would require me to first state who would qualify as a ‘successful investor’ and what’s ‘substandard’.

Successful Investor: I think anyone who manages to deliver 18%+ p.a. return over a 5 year period should be in contention.

Consistency is the key. It should be no argument if one were to make 50% return in a single year to then claim that he covered ground for the next 4 years, even if he were to put all his winnings in a fixed income product.

The certainty of an 18% return is a far more desirable trait than the ability to make quick gains in short periods as the latter gets into the realm of speculation.

There is nothing new that I will talk about in this post. Often it is nice to reiterate what we already know. The more you say it, the more you are likely to eventually start practicing it. So here it is: 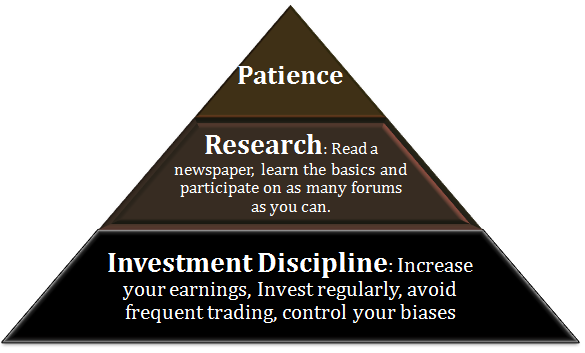 I have written much about investment discipline. Think about it – there must be a reason why the most successful guys in stock markets are referred to as – investors and not by any other term. Investment requires a regular stream of income. If you are looking to quickly multiply your corpus by doing some quick trades in stocks, your best bet would be some form of technical/ momentum kind of trade. A few have succeeded at that; so its very possible, albeit risky.

5 Investing Rules You Should Follow to Achieve Investing Success

Research is something you may be able to outsource, though it helps to be aware of what’s going on all around you. In any event, it is easy to understand basic numbers. In short, this is not where many people falter.

There is a reason why Patience occupies a position right over the top of the pyramid It is the most important of all habits for successful investing. While your portfolio may be built on traits of sound research and military discipline, unless you have what it takes to hold on to it, nothing will ever work.

Patience in markets is not restricted to the ability to allocate money to stocks and then hold on to them; it equally applies to YOUR ABILITY TO NOT DO SOMETHING FOOLISH WHEN THINGS DON’T PRODUCE THE DESIRED RESULT.

First, when a stock does not move for a long time: Those of you who are subscribed to my premium service will know that there are stocks in my list which have remained close to their price of recommendation for months. I can assure you that most of them will give you a sudden 20-30% movement at some point in future. In the short term, markets are often driven by investor sentiment more than anything else; sooner than later reality does catch up and the real strength of the business starts getting reflected in stock prices.

Second, when a stock starts moving up (or down) quickly: day before yesterday, after the FM announced the news of merger of the four subsidiary banks of SBI with their parent, the subsidiary banks rallied 20%. Then 20% again yesterday. These things happen when mergers/ acquisitions are announced. I can tell you at least 5 companies where similar things will happen in future. Don’t lose your head and start buying/ selling stocks because they suddenly moved a lot. Learn to ignore these market factors.

Be patient with your portfolio and keep your expected return in mind. You will do well.