5 Qualities of A Good Manager Analysts and investor focus so much on things that are foreseeable based on financial aspects that the subject of management traits such as qualities of a good manager hardly, if at all gets any mention in a standard equity research report.

What needs to be paid the highest level of attention to, is mostly ignored by investors – Quality of the management. I am not sure why a typical equity research report does not cover quality, integrity and competence of management as one of the factors in valuing the company even when all empirical evidence suggests that companies which do the best are the ones which are run by people of proven track record of excellence and an impeccable work ethic. On the contrary, 8 out of 10 companies which go bankrupt achieve that feat because of crooked or unreasonable management, and not because of any notable problem with the business model. 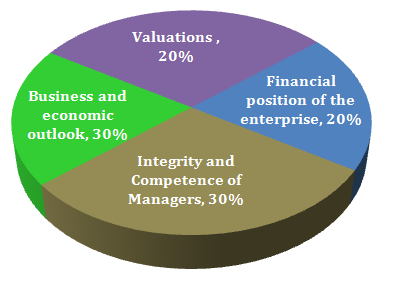 [1] Honesty – The number one quality of a good manager is that he will remain honest. Not when it is easy to be so, but more when it takes courage to be honest. Of course to judge a man on this principle is not only difficult but is also very subjective.

How do you judge honesty?

Most people who make it to a corporate board or top level management would ensure that their name does not appear in the list of willful defaulter maintained with the RBI or CIBIL. On the contrary, they may often pay top notch PR firms to create a mask of honesty. How then do you go about uncovering the truth? There are no full proof ways of doing this which explains why not much has been written about this. An honest person should pass a three pronged test:

One would imagine that the merchant bankers and attorneys who work on these deals will be in a better position to ascertain honesty. Time and again they have failed at this. Such failure is often the result of their unwillingness to look at the obvious. Think about how these bankers earn their commission** and you will understand the reason for this willing oblivion on their part?

** (In all capital market transactions, the merchant bankers earn a commission based on the money which they manage to raise for the promoter’s business.)

[2] Rationality – This is easy to judge. Pick up a few annual reports of the company and read what the management claims and plans to accomplish. If you do not understand them, don’t invest. Simple! The extract below remains one of my all time favorite on the subject:

. . . . . Mr. Figgie was not alone in conning Wall Street. Managers of other conglomerates almost invented a new language in the process of dazzling the investment community. They talked about market matrices, core technology fulcrums, modular building blocks, and the nucleus theory of growth. No one from Wall Street really knew what the words meant, but they all got the nice, warm feeling of being in the technological mainstream.

Conglomerate managers also found a new way of describing the businesses they had bought. Their shipbuilding businesses became “marine systems.” Zinc mining became the “space minerals division.” Steel fabrication plants became the “materials technology division.” A lighting fixture or lock company became part of the ”protective services division.” And if one of the “ungentlemanly” security analysts (somebody from City College of New York rather than Harvard Business School) had the nerve to ask how you can get 15 to 20 percent growth from a foundry or a meat packer, the typical conglomerate manager suggested that his efficiency experts had isolated millions of dollars of excess costs; that his marketing research staff had found several fresh, uninhabited markets; and that the target of tripling profit margins could be easily realized within two years.

– A Random Walk Down Wall Street by Burton Malkiel

Compare current year’s annual report with last year’s. If you find that the management keeps changing their plans and future goals or where they abandon plans mid way, don’t invest.

Company A – is planning to introduce delicious zero-fat homemade cookies in 8 flavours, priced 8-10% cheaper than their competition.

Company B – will be spending most of its accumulated reserves in buying equipment for exploration and discovery of diamonds and other precious metals in the forests of Karnataka.

While both businesses may have a plan, the risk-reward potential differs significantly in each case. To an extent, so does rationality.

[3] Lifestyle & Habits – Many may not agree with my ways of life and in particular with where I spend my money. Just as I do not wish to convince them about the sanity of my choices, you do not have to be convinced with me when I measure a person’s rationality based on their personal choices. A good business decision to one may be a big stupidity to another. One of my friends bought a 7 Series BMW even though he admittedly could have put the money to better use. Further, he is not that fond of cars. He mostly uses it as a taxi to ferry his outstation clients between airport and their hotel. He thinks it helps him win deals. A rational person may question the quality of his product more than his car but so long as it works for him any such line of questioning is futile.

Nevertheless, there are certain things which are devastatingly stupid in nature. Recently this widely circulated image (above) showed certain jewellery retailer hosting a dinner where food was served in crockery made of precious metals (gold /silver). I cannot think of a single merit one could attribute to such practice. It is this absurd behavior which you should look out for.

From expensive homes to spending on cruise ships with young models; promoters invariably  claim that the money being spent was out of their personal wealth. But again, my reason for not investing in companies run by such people is not because of any suspicion on their honesty. That may well be a totally separate issue. I genuinely worry about the sanity of such person(s) and would rather look for someone more admirable.

Also Read: How much is too much when it comes to executive compensation. 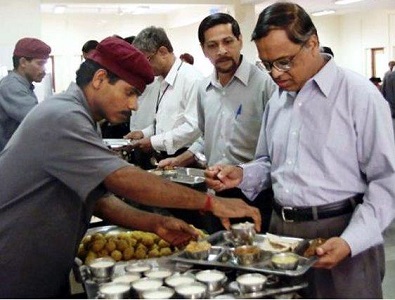 The above picture is of Narayan Murthy, founder of Infosys, having lunch with members of staff at Infosys cafeteria.

Good managers have an admirable way of life.

[4] Good managers explain their business – I touched upon this point when I wrote about honesty above. When judging a corporate manager notice how he explains his business. Can he convince you about the merits of investing in his plans?

The objective should be to differentiate between a storyteller and someone who is passionate about achieving what he claims. As important it is to understand the business model (and to believe in it), equally important it is to examine how much time and energy have the manager(s) spent in doing ground work. Have they made any serious efforts in doing what will enable them to accomplish their goals?

Story tellers do not go beyond explaining a beautiful plan.

[5] Good managers are Confident – amongst all the other qualities of a good manager, the one that stands out the most is that they are confident of their decisions and they don’t do things purely because everyone else is doing them. This happens a lot in the mutual fund industry. One asset manager recommends a stock and every fund house wants to hold some of it.

This tendency to imitate what others are doing is often the result of an ‘unwillingness to do nothing’. Managers get so used to activity that when they run out of ideas, they start imitating each other. The other explanation of why this may happen is that nobody wants to be singled out particularly when you are not the promoter and are answerable to a board. You try to create protection by copying the industry trend on which you can later put blame, in case things dint  work out.

Look for managers who admit mistakes and are honest with shareholders. Who are not scared to work away from the herd and above all who talk more about their business and less about the price of their company’s share.