7 Things That Make Me Bullish About Stocks in 2017 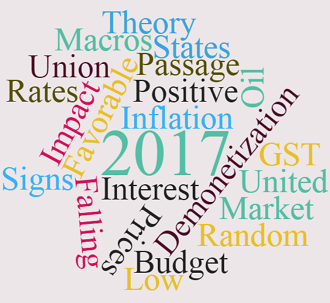 Low inflation and crude oil prices will enable RBI to reduce interest rates in 2017, perhaps by up to 0.50% – 0.75%. Further, with a huge amount of money coming into the banking system post demonetization, RBI will have to ensure loan off take to keep the banking machinery in order. This is another strong reason why RBI will be encouraged to cut interest rates.

It is true that demonetization is going to have a materially negative impact on the economy in the short term. Consumption-led companies will be the first to feel the heat as consumers scramble for cash, impacting demand for packaged goods, durables and consumer discretionary items. The much-awaited earnings recovery, which was on the horizon, now looks at least two quarters away due to slowing down in the consumer demand.

But over the medium to long-term, demonetization will boost GDP growth and equity markets as more transactions will be accounted in the formal economy. Most importantly:

Lower crude oil is one of the biggest catalysts for high infrastructure and defense spending. Indian companies which have crude as a major raw material also get a big lift in profitability margins.

Decline in crude oil prices help the government to manage its finances better as it translates into lower subsidies on petroleum products (LPG and kerosene), thereby resulting in lower fiscal deficit. In short, the government of India spends the most of its revenue collection on buying crude oil. Lower crude prices are golden for the government.

As the Good and Services Tax (GST) rolls out in 2017, it would be extremely interesting to see how this huge task will be implemented by the government. One has to discount the initial hiccups and implementation challenges, but over the long term, GST is set to change the course of the Indian economy.

India would benefit in multiple ways — from efficient inventory management, to unified taxation, easy compliance, and create a common market place. All these factors will eventually boost bottom line. As margins improve, so would the underlying performance of the stock prices.

The Union Budget 2016-17 is expected to unveil crucial economic reforms including measures to ramp up fiscal spending. While everyone may have their expectations from the budget, I believe the government will come out with populist measures to woo not only tax payers but also to ensure that money (now lying idle) in bank accounts gets channelized by way of developmental debt off-take.

Post demonetization, the Union Budget will be the perfect time for the government to give some sort of stimulus in the form of concession for consumers to drive demand in the economy.

[6] Positive Signs in the United States

U.S. unemployment numbers are at multi year lows. Being the biggest consumer of services and products in the world, the health of the U.S. economy is of prime concern to manufacturers and service providers in India (and indeed for other parts of the world). 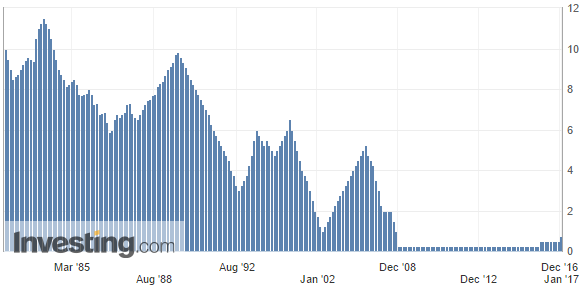 Further, the Federal bank of the United States recently increased interest rates to 0.75% after they remained at 0.25% for over 8 years (i.e. since 2008 until earlier in 2016). Fundamentally, when Federal Reserve raises interest rates it is a confirmatory sign that there is enough liquidity in the U.S. economy (and indeed in the world), and that there is no need to persist with low interest rates. Higher interest rate gives the central banks a cushion to create more liquidity in future in case there is need to spur the economy going forward.

The only way to catch that hyper bull market that we have all seen in past is to stay invested in quality, and don’t predict a thing.

The fact that the last 24 months have delivered no returns is a good sign for 2017!