Ashok Leyland (“Ashok Leyland” or the “Company”) is one of India’s leading manufacturers of commercial vehicles including trucks and buses, as well as emergency and military vehicles.  Headquartered in Chennai, Ashok Leyland has six (6) manufacturing facilities in India (two at Hosur and one each at Bhandara, Ennore, Alwar and Pantnagar) and operates a facility each at Prague, Czech Republic and in Ras-Al-Khaimah, U.A.E. The Company exports to over 30 countries worldwide, and is the leader in the bus markets of Sri Lanka, Bangladesh and Mauritius. In addition Ashok Leyland has significant presence in the Middle East and Africa.

This Stock Analysis report presents a long term outlook and the future prospects of Ashok Leyland.

Ashok Leyland Limited is India’s second largest commercial vehicle company in the Medium and Heavy Commercial Vehicle (“M&HCV”) segment. It is the market leader in terms of volumes in the bus segment, and enjoys market share of roughly 23% in goods carrier segment.

In FY 2012, Ashok Leyland entered into a 50-50 joint venture with John Deere Construction & Forestry Company for manufacture and sale of special vehicle construction equipment. In FY 2012, the Company forayed into the Light Commercial Vehicle (“LCV”) segment partnering with Nissan in a 50-50 joint venture, launching ‘DOST’. Both these ventures have started showing  impact on the operational performance of the Company.

In FY 2014, the Company successfully launched the ‘BOSS’, an Intermediate Commercial Vehicle (ICV) in the domestic market. This has enabled the Company to achieve ~15% market share in the ICV segment in India. In January 2014, the Company also launched the CAPTAIN series of next – generation heavy commercial vehicles. We believe that these new products will help balance the product offerings from Ashok Leyland, whose portfolio has traditionally been skewed towards the heavy duty segment. 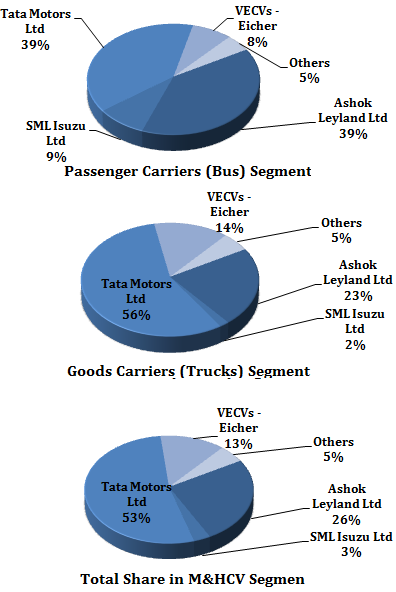 The Company’s subsidiary “Ashok Leyland Defence Systems Limited” which supplies logistics vehicles to the defence sector has signed an MoU with Krauss-Maffei Wegmam GmbH of Germany for developing advanced defence system for Indian defence forces and for defence forces worldwide.

In FY 2011, Ashok Leyland acquired a 26% stake in Optare PLC, a leading bus maker in the UK to improve its technological capabilities and with a view to address newer markets.  On June 1 2012, Optare closed down its bus factory in the UK and consolidated its bus assembly operations in the facility in Sherburn in Elmet, Yorkshire, to achieve better efficiency and reduce overheads and costs.

The Company has installed capacity of 150,000 vehicles per annum from across its seven manufacturing plants. It has lined up capital expenditure of Rs. 500 crore for FY 15. Major chunk of this outlay will go in setting up a greenfield manufacturing facility near Chennai under a JV with Nissan. The facility will manufacture light commercial vehicles. Part of the capital expenditure will also be used for investing in plant and equipments, a major portion of which shall go into the Pantnagar plant.

The plant at Pantnagar which was commissioned in March 2010, has achieved full production capacity. This is the Company’s largest plant and has the capacity to manufacture 75,000 vehicles per year at full capacity including an entire range of products, trucks and buses. The Company expects to cater to the north Indian market from this location.

The plant is expected to become profitable in the current financial year with increased volumes from this manufacturing facility. For the Pantnagar plant, the Company enjoys total exemption of excise duty for 10 years, full income tax holiday for 5 years and up to 30 % exemption for the following 5 years.

General slowdown in the auto industry in the short term

The automobile industry in India is one of the largest industrial sectors and contributes about 5% of India’s GDP. There is moderate to high competition in the automobile sector in domestic market. In commercial vehicle segment, AL stands second to Tata Motors, which is the largest commercial and passenger vehicle manufacturer in India. Other domestic competitors are Eicher Motors and SML Isuzu Limited. Many foreign automobile manufacturers are aggressively entering high growth emerging markets such as India amidst slowing demand in the developed economies. The competition within the country is also increasing with new players entering the market and some smaller players catching up. The competition is likely to further intensify in view of the continuing globalization and consolidation in the worldwide automotive industry.

** The stock analysis of Ashok Leyland including the financial analysis report linked above, is for information purpose only.  This analysis should not be taken as a buy/sell recommendation. The circumstances of the company and the economic environment may have changed since the date of this stock analysis.