Bajaj Auto Limited (“Bajaj Auto” or the “Company”) manufactures and sells motor cycles, three-wheeler vehicles, and automobile spare parts in India and internationally. The Company offers its two-wheeler products under the Avenger, Pulsar, Discover, Platina, and Ninja brands. It also provides commercial goods and passenger carriers under the RE brand. The Company operates three plants, two at Waluj and Chakan in Maharashtra and one at Pant Nagar in Uttranchal, western India.

Bajaj Auto has a diversified product portfolio including – motorcycles for all segments: Platina (entry), Discover (executive), Pulsar (premium) and Ninja (sport) and sizeable presence in three-wheelers segment. The Company derives about one-third of its revenues from the export of two and three-wheelers. This product diversification helped Bajaj Auto achieve its highest ever EBITDA in FY 2014-15.

The Company has maintained an average dividend yield of 2.46 % over the last 5 financial years.

Bajaj Auto’s average current ratio over the last 5 financial years has been 1.34 times which indicates that the Company is comfortably placed to pay for its short term obligations.

Bajaj Auto’s average long term debt equity ratio over the 5 financial years has been 0.01 times which indicates that the Company operates with close to zero debt and is placed well to withstand economic slowdowns.

Bajaj Auto’s average interest coverage ratio over the last 5 financial years has been 2067.89 times this indicates that the Company can meet its debt obligations without any difficulty.

Bajaj Auto is India’s leading exporter of motorcycles and three-wheeler. The Company exports to approximately 62 countries and enjoys a leadership position (1st or 2nd) in 20 of them. During FY 2015, exports accounted for 46.2% of the Company’s net sales. 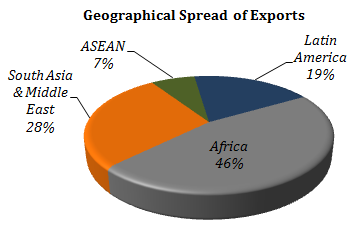 The Company’s iconic brand ‘Discover’ and ‘Pulsar’ have helped the Company in strengthening its market share in key markets like Colombia, Central America, Egypt, Sri Lanka and Bangladesh.

The Company is actively considering steps to enter new markets such as Argentina, Turkey, Ghana, Afghanistan, Lebanon, Guinea, Togo, Mali, Burkina Faso and Liberia which will further help the Company strengthen its market share as well as its financial position.

Bajaj Auto is the world’s largest three-wheeler manufacturer. The domestic three wheeler industry has four major participants namely Bajaj Auto, Piaggio Vehicles, Mahindra and Mahindra and Atul Auto. For FY 2015, the Company has a leadership position in the three- wheeler segment with 61% market share. To maintain its position, the Company has launched a number of new product variants focusing on best mileage, lowest maintenance, competitive pricing. These are:

Domestic: In India, the Company is expected to leverage on the positive developments taken in this sector particularly in Maharashtra. The state has issued fresh three-wheeler permits for around 80,000 units and the Company expects more auto permits in other large states such as Delhi and Andhra Pradesh which will increase its future sale of auto. Another major development is the approval of the inclusion of a new category of vehicles, the Quadricycles by the Ministry of Road Transport and Highways. We believe this will further help Bajaj Auto to enter into a new segment and strengthen its leadership position.

Export: Also, the Company is the biggest exporter of three-wheelers; Egypt is the second biggest export market for the company after Sri Lanka. Bajaj Auto is the market leader in the three-wheeler space in Egypt, as the company accounts for almost 90% of total volumes. The Company is taking further steps to increase its exports of three wheelers and expects an incremental volume of 25,000 units from the Egypt market

Bajaj Auto faces stiff competition from new and existing players. Various product launches by Hero Motor Corp, Honda, Yamaha and TVS are expected over the medium term and this could put pressure on the domestic market share of the Company. Further, Bajaj Auto does not have any presence in the growing scooters segment. According to SIAM, the share of scooters in the two-wheeler market has risen from 15 % in 2012 to 25 % in FY 2015, as the market has expanded with all two-wheeler manufacturer introducing new models to tap into the young urban buyers. Thus, the Company may face some difficulty in beating its competitors who also have an active presence in the scooters segment.

** The stock analysis of Bajaj Auto including the financial analysis report linked above, is for information purpose only.  This analysis should not be taken as a buy/sell recommendation. The circumstances of the company and the economic environment may have changed since the date of this stock analysis. Click the link for an updated list of the blue chip companies in India.