Received this question on ITCs investment potential – day after the Government decided to put a ban on sale of loose cigarettes – 27 November 2014.

I had a query regarding ITC.

Over a period of time I have accumulated 1700 units of ITC (average price:290). However in the wake of recent regulatory issues and recent news of ban on loose cigarette sale, I feel I should re-look at my holdings (probably hold/sell it and stop buying further).

Also wanted to let you know that I’m a long term investor and not a trader and I wouldn’t mind holding it for the next 10 years, if it still had potential.

I’d like to know your take on it. What should I do?

For the health of our people, I have long hoped for such stringent steps. Actually, not only is there going to be a ban on sale of loose cigarettes, prices may be revised up further – after they are already up by over 60% in the last 24 months. Further, given that gory pictures of disease on cigarette boxes –  along with all the bad that there is in the world – did not deter the people, there is now talk on complete ban on advertising – even on points of sale and of plain paper packing – i.e. no labels on the box – just a word saying cigarettes. In past many such steps have failed. These include – Statutory warnings, sale prohibition near schools and colleges, no commercials on television, no sponsoring of events for cigarette makers, ban on smoking in public spaces etc.

In this backdrop ITC has grown over 27% CAGR over the last 10 years.

Coming back to your question – Should you hold ITC? / Buy more?

Let’s say that the government is able to regulate the millions of distribution channels, i.e. every paan-bedi shop in the country. will it have an impact on the overall cigarette sales? If you believe – Yes, there could be then explain to me why the use of synthetic and psychotropic drugs is on the rise in India? Certainly there are no points of sale, regulated or otherwise for marijuana and cocaine in our country.

The Truth is That – Anytime you allow someone to sell an addiction, no amount of control on it will work. Further, in a country like India with a majority of population being young – who look at cigarettes as an aspirational product, the potential for this market is immense.

If one needs a precedent – most of this has already been implemented in the United States – which is often from where we get our cues on public health from.

Has it affected the sale of Marlboro in the United States? Here is a 10 year share price chart of Philip Morris, the makers of Marlboro – 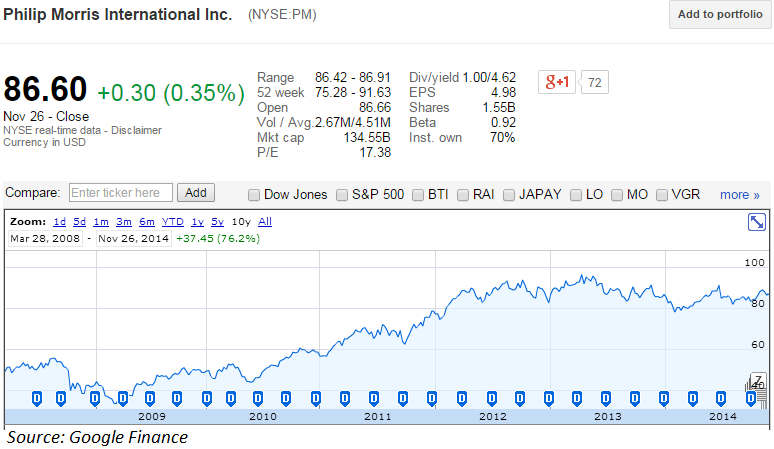 By the way a 20 pack of Marlboro in Manhattan will cost you – $13 (that’s Rs. 800 – 4 times over). Just like in India the increase in prices have been gradual but successfully passed on to the consumer.

Should you buy more – Absolutely yes. Surely if you can hold it for 10 years.

I cannot guarantee what will happen in the next few quarters. May be the  government decides to sell its stake in ITC which it recently increased to 14.42% (Life Insurance Corporation holds 14.42% of ITC, and I agree with that – I think insurance and cigarettes create natural synergy). If this stake is liquidated into the market, the price could fall drastically or at best remain where it is for a few years. I doubt if this will happen.

You may also want to read about the breakup of ITC revenues here. Make no mistake, they are as much a cigarette company today as they ever have been in past.