Best Valuation in IT Stocks at Current Prices

The recent correction in stock markets has brought down valuation for many sectors. Amongst others, Valuation in IT Stocks has come down significantly post the demonetization move by the Government. Keep in mind that IT stocks were already operating in a difficult environment post Brexit and on the back of all the negativity created by the U.S. Elections.

This is how much IT Stocks in the BSE 500 Basket have corrected since the beginning of this Financial Year: 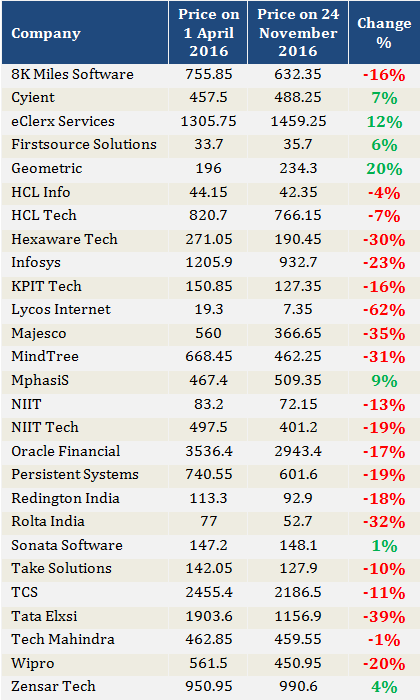 I promise you, Bookmark this page and come back after 6 months and you will see that this has been the best performing sector.

Brexit – Earlier this year when Britain exited the European Union much was made about its impact on the revenue for IT companies. It is true that a major part of revenue (~ 24% for top 3 IT companies in India) comes from EU, but the defining word here is – EU, not UK.

U.S. Election Rhetoric – It was not for the first time that U.S. was going into an election and not for the first time, outsourcing, H1B visas and all things related to immigration came in focus in the United States of America. As it happens once in every 4 years, Indian IT Companies, mysteriously with or without exposure to the U.S. suffered (as a side note, I often wonder how General Electric – an American company manages to derive 70% of its revenue from outside the U.S. and yet its stock never really suffers; same goes for Phillip Morris).

Hostorically, post the U.S. Elections, these stocks do well, something I have reiterated more than a few times since the beginning of this year. Further, Demonetization and depreciation of the Rupee actually helps this sector more than any other sector, both sentimentally and on paper.

Compounded Effect – As it often happens in stock markets, too many bad things create a negative sentiment in general which gives rise to unfounded apprehensions. Some of the things I have heard from some otherwise really smart people: This sector has had its hay day, the best of high growth phase for this sector is over and that now it will grow at a slower pace. I could not disagree more. To my mind, this sector is yet to see its best days. Technology is just about beginning to take over and we cannot even imagine what’s there in store in future. Nothing will be possible in tomorrow’s world in the absence of technology.

Who says it is game over for IT largecap? Hold them for a long time: Rajat Sharma, CEO, Sana Securities