Block Deal: A single trade of over 5, 00,000 shares or a trade where the total value in monetary terms is greater than or equal Rs. 5 Cr.

Timing: The market participants are allowed to enter into block deals only during the first 35 minutes of the continuous trading session as the market opens i.e. from 9:15 am to 9:50 am.

Pricing in Block Deals Order: The Securities and Exchange Board of India (SEBI) requires that block deals order should be placed in price range not exceeding +1% to -1% of the last traded price or the previous day’s closing price.

Order Matching: Naturally, in an open market it would be difficult to control the buying and selling of securities at a pre-set price as it may run havoc on free flowing orders. How is this done? The example below explains this point:

In above case, buy block deal order will match with the sell order as the quantity and rate of both the orders are same.  To make things work and to ensure that none of the other market participants get affected by deals between predetermined buyers and sellers, the price is kept slightly higher or lower (within the 1% range) of the current trading price.

In above case, buy block deal order will not match with either of the sell orders as the quantities do not match although the price is same.

BOTH (I) PRICE AND (II) QUANTITY OF THE ORDER MUST MATCH FOR A BLOCK DEAL ORDER TO GET EXECUTED. ALSO – BLOCK DEALS ARE NOT VISIBLE TO THE REGULAR MARKET AS THEY HAPPEN IN A SEPARATE MARKET WINDOW. SEBI ENABLES A SEPARATE BLOCK DEAL WINDOW IN BROKER TERMINALS SO THAT SUCH DEALS DO NOT DISTURB THE EQUILIBRIUM OF THE MARKET

Further, Block deals order remains valid in the system for 90 seconds only, after which they get canceled if remain unexecuted.

Note: All block deals order have to be settled on a trade-to-trade basis. Every trade executed in this window must result in delivery and shall not be squared off or reversed. Block deal orders cannot be traded partially. If not traded fully, the order is cancelled.

Disclosure: Block Deals orders are notified to the stock exchange and are disclosed on the exchange’s website. The stock exchanges has to circulate the information on block deals such as the name of the scrip, name of the client, quantity of shares bought/sold, traded price to the general public on the same day, after the market hours. You can see details of previous days orders on the links below: 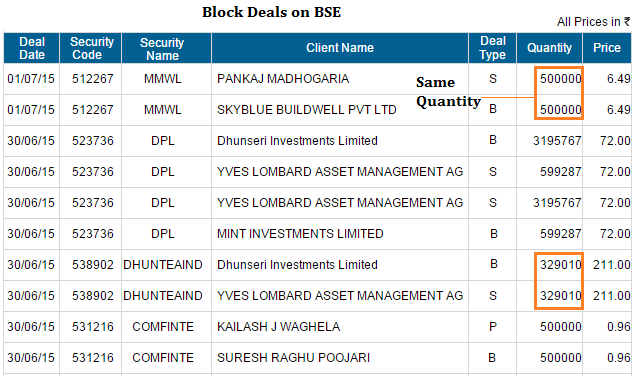 Bulk Deal: Bulk deal is a trade (single or multiple), where total quantity bought or sold is more than 0.5% of the number of equity shares of a company listed on the stock exchange.

THE BIG DIFFERENCE BETWEEN BLOCK AND BULK DEALS IS THAT BULK DEALS ARE NOT PRE-DETERMINED – they are market driven. The buyer and seller do not know each other.

Timings: A bulk deal can be executed anytime during trading hours. If during a single trading session, a buyer ends up buying more than 0.5% of the total equity of a company in single or multiple trades, then the moment he crosses the 0.5% mark, he is deemed to have done a bulk deal.

You can get bulk deal data on the links below:

Disclosure | Bulk Deal: Trading members (brokers) have to disclose to the stock exchange the name of the security, name of the client, quantity of shares bought/sold and the traded price.

Who Can Participate In Block Deals and Bulk Deals?

On 26th June, 2015, Welspun Corp’s promoter increased their stake in the company by buying 5.67 million shares representing 2.16% stake at an average price of Rs 93.58 per share.

On 18th February, 2015, Hero MotoCorp’s promoter decreased their stake in the company by selling 7 million shares representing 3.5% stake. Many orders were placed at an average price of Rs. 2,664.93.

The Rationale Behind Block Deals and Bulk Deals

The rationale behind SEBI’s decision of introducing disclosure of such deals is to increase greater transparency in bulk/block deals and to prevent rumors and speculation. When trading volumes in a stock increase, it creates all sorts of rumors including a potential sale by the promoters or an increased interest from institutions. A disclosure is meant to clarify and explain the reason for increase in volumes.

Quiet apart, a block deal is often the only efficient way in which buyers and sellers can trade their holdings. Imagine you are holding 50,00,000 shares in a company which is thinly traded. It would be difficult to sell such a huge quantity in the open market as you may not find a willing buyer at a price far below the current trading price of the stock. A block deal increases efficiency of execution in such trades while keeping them completely transparent.

Is Information on Block Deals and Bulk Deals Helpful To Investors?

[1] The disclosures in block deals and bulk deals are meant to help the investors to know whether the stock price increase is genuine or operator driven.

[2] The disclosure can also be used to decide trading strategy based on stock price movement.  These disclosures often also suggest the sectors which are currently in favor and sectors where buying interest is falling.

Blindly following the block deals and bulk deals information would not be an intelligent investment strategy. Investors should focus on the fundamentals of a stock, and then look at the profile of the institutional investor (buyer or seller). They should go through institutional performance over the years, and the future prospects of the company before investing. Remember – most of the bulk deals indicate absolutely nothing. They happen because of high frequency algorithmic traders who place large buy/ sell orders. In addition, it is futile to predict individual circumstances under which a buyer / seller would buy / sell their holdings.