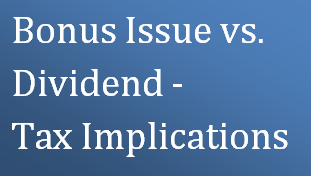 Dividend: Dividend refers to amount of money paid by a company to reward its shareholders out of its profits. As per existing tax provisions; income from dividends is tax free in the hands of the shareholders but companies have to pay Dividend Distribution Tax (DDT) on the amount declared as dividend.

What is Dividend Distribution Tax (DDT)?

DDT is levied on companies @ 15% on the amount distributed as dividend to the shareholders of the company. Accordingly, a dividend-paying company first pays 30% income tax on its profits and then pays a 15% DDT on what it distributes to its shareholders out of its post-tax profits.

So how does the total transaction pan out in simple terms?

To calculate the tax amount, use the formula below:

Note: For the purpose of this article DDT is calculated ignoring the surcharge and cess amount.

So the total transaction pans out as:

Shareholders: Rs.400 on which no further tax is levied.

The Finance Act 2014 has amended Section 115-O in which the dividends would be required to be grossed up for the purpose of payment of DDT.

Example on how DDT was calculated prior to the 2014 Amendment

(*This Rs. 340 is divided by the number of shares to calculate per share dividend)

Bonus Issue – Bonus shares are issued by cashing in on the free reserves of the company. A company builds up its reserves by retaining part of its profit over the years (the part that is not paid out as dividend). After a while, when this free reserves increases, the company can issue bonus shares.

A 1:2 bonus means that a shareholder will get 1 share for every 2 shares that he holds. I.e. if you are holding 10 shares, you will get 5 bonus shares. You do not need to pay any tax to receive these bonus shares.

Bonus shares are treated as normal shares and tax implication only arises in case of short term capital gains (holding period less than 12 months) in the hands of investors/shareholders.

[2] As per the Companies Act 2013, “No dividend shall be declared or paid by a company for any financial year except out of the profits of the company for that year”.

Consider a situation where company has incurred a loss in a particular year. In such case, it cannot pay cash dividends but company can issue bonus shares. A bonus issue is also perceived by investors to be a strong signal by the company’s management of its readiness to service an enhanced shareholder base.