Bosch India Limited (“Bosch” or the “Company”) is India’s leading supplier of technology and services in the areas of automotive and industrial technology, consumer goods and building technology. The Company is headquartered in Bangalore with manufacturing facilities at Bangalore, Nashik, Jaipur and Goa.

Bosch set up its first manufacturing plant in India in 1951. Over the years, Bosch has grown tremendously in India. In 2015, the Bosch Group in India had a turnover of about Rs.12,085 Cr. Bosch currently employs 26,000 people across 10 manufacturing locations and 7 research and development (R&D) facilities in the country. Since 2010, the group has invested ~ Rs. 5,400 Cr. in the expansion of manufacturing and research facilities, of which Rs. 1,200 Cr. was invested in 2014 alone. 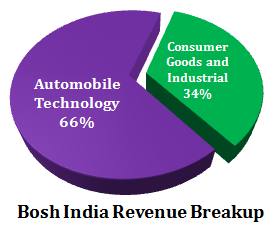 The Company generates around 66% of its revenue from automobile technology and the balance (34%) comprises of consumer goods and industrial sectors. The Company has taken a notable step to expand its presence in the non-automotive portfolio by entering into eye screening and detection system. Also, infrastructure, energy; and particularly – conservation and efficiency and -food packaging offer maximum potential for growth.

Note – In FY 2015, the Company has changed its financial year period from January – December to April – March. As such, the figure for financial year ended March 2015 contains figures for last 15 months.

The Company has maintained an average dividend yield of 0.72 % over the last 5 financial years.

Bosch’s average current ratio over the last 5 financial years has been 2.54 times which indicates that the Company is comfortably placed to pay for its short term obligations.

Bosch’s average long term debt equity ratio over the 5 financial years has been 0.04 times which indicates that the Company operates with close to zero debt and is placed well to withstand economic slowdowns.

Bosch’s average interest coverage ratio over the last 5 financial years has been 162.04 times this indicates that the Company can meet its debt obligations without any difficulty.

Bosch India provides customized solutions for the Indian market. The products and solutions are tailored to the needs of the local customers at affordable costs. As part of its – ‘local for local strategy’, Bosch believes in local manufacturing as well as local engineering. The company, for instance, has developed an electronic-hydraulic hitch control for the Indian tractor market. This was developed in collaboration with local farmers.

Another example is of Tata Nano – the cheapest four wheeler car in the world. Bosch India developed the two-cylinder Common Rail Direct Injection (CRDi) system for Tata Nano with an enhanced Electronic Control Unit (ECU). Bosch and Tata Motors have continued their collaboration and are now working on developing a 1.1-CRS (common-rail system) for Nano’s diesel version.

Most of the automobile companies in India are looking to diversify. Bosch has also adopted this strategy and has entered into non automotive businesses. I believe that its future growth in the country will depend largely on its non-auto technology businesses.

Bosch India is increasingly diversifying its portfolio, adding products and services beyond the automotive side as a de-risking strategy.  In that sense, Bosch is no longer only about automotive components. The Company has started many businesses in the non-automotive side including:

Antilock Braking System (ABS) – Bosch is the only automotive supplier that manufactures ABS in India. The Company produces about 300,000 ABS systems per year at their facility in Chakan, Pune.

In India, Robert Bosch Engineering and Business Solutions India (RBEI) are engaged in the development of emerging technologies called advanced driver assistance systems (ADAS) which results in driverless cars. Although Indian cars may not have these technologies for some time, engineers in India are developing it for European and American cars.

The Company is active on connected cars. For example: Maruti Suzuki’s luxury sedan Ciaz which sported the Linux-based operating system, which helps in connecting the car to smart phones was developed by Robert Bosch Engineering India (RBEI).

The Bosch Group in India, through its subsidiary Bosch Chassis Systems India Limited, provides solutions for electric and hybrid electric vehicles. The Company plans to invest Rs. 2,200 Cr. on increasing capacity, diversification and development of new electric and hybrid technologies over the next two years. Their development work would focus mainly on electronic control units for hybrid and electric vehicles.