A quick word on Unlisted vs Delisted Shares:

Unlisted shares – shares which never got listed on an exchange in the first place. Still it is possible that an active secondary market exists in these shares.

Example – Ratnakar Bank and Bombay Stock Exchange both of which are likely to get listed on a stock exchange soon.

Delisted Shares – Shares which were once listed on a stock exchange and hence had high liquidity. The term delisting of shares or securities refers to the removal of a listed company from a stock exchange. When a company is delisted, the shares of that company are no longer traded on that stock exchange.

Many people get confused between public limited companies and publicly traded companies. All publicly traded companies are public limited but not the other way around. Shares of a public limited company whether listed on a stock exchange or not can always change ownership. Any shareholder can sell his holding in full or part to any other person. The only difference is that when shares get listed on a stock exchange this trade becomes a lot easier. Buyers and sellers don’t come face to face and are able to trade using an exchange platform. Apart from making a company’s stock highly liquid, this serves (at least in theory) as a great price discovery mechanism for the business, where market determines the price of a share.

For unlisted shares, secondary market mainly develops as existing shareholders sell their holding in part or full and hence more shareholders emerge on the scene. Mostly buyers and sellers in this case are large fund houses.

New investors and particularly smaller retail investors stay away from buying these shares since they fear that they may not be able to sell these shares easily in the absence of active trading on a registered stock exchange. For this reason, the price at which these shares change hands is usually far less compared to the actual valuation of the company. 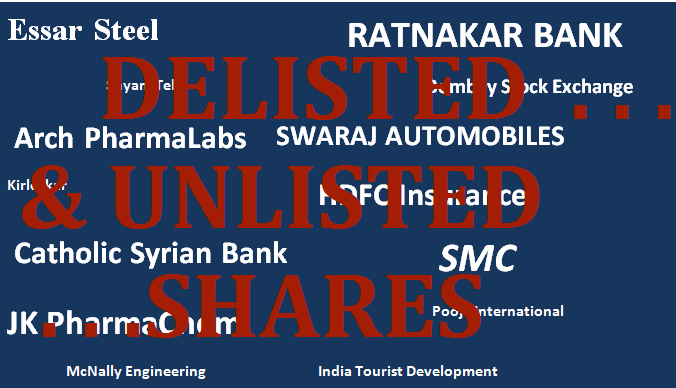 Here again, there could be active trading in secondary market but the bigger opportunity which dealers of such shares seek is to buy these shares from retail shareholders who did not tender their shares at the time when the company made its open offer.

All this of course depends on a multitude of factors including most importantly, the likelihood of the company getting listed again and soon. Other reasons could be – collecting shares from small retail investors and selling a larger chunk to a bigger investor or may be to the promoters of the company at a substantial premium. This typically happens before the company plans to list again or where it plans to sell its entire shareholding in an acquisition or merger.

In practice, those on the know-how of developments – insiders, investment bankers, company’s auditors and legal counsels are the first ones who start buying delisted shares.

Without getting into any theory – anyone who did not tender their shares when the company got delisted. There is of course a multi-crore rupee market for shares not listed on a stock exchange that are sold in the secondary market.

Depending on how well the company has done since the time it got delisted there is a substantial addition to the share price, something not many retail share investors pay attention to. Chances are that a company which is planning to list again would have done well enough to take such a step – of listing again.

Nevertheless, many retail shareholders are often happy to find a buyer for their shares at any price they can get and mostly the price at which those shares got delisted.

Should You Buy Delisted / Unlisted Shares?

Remember that most people who buy and sell such unlisted, delisted, non-traded, lowly traded shares are all betting on a future revival. In many cases these are market operators who are aware of a lot more than others. Unless you are part of a syndicate of people whose business it is to deal in such securities, I would say avoid it. There are better ways of making money. Also keep in mind that there is hardly any regulation governing these types of transactions. That said, if you are absolutely certain that something is afoot with the company then who am I to stop you.

And Yes – dealers buy not only delisted / unlisted shares but also pre-IPO shares and shares that are lowly traded. So if you have a large number of shares of a company which though is listed but the shares of which are thinly traded, you may approach such dealers. Many companies have no active secondary market despite being listed on the stock exchange and not more than a few hundred shares are traded on a daily basis.

Circumstances Leading to Delisting of Shares

Not all delisting is bad for the company. At times, the promoters may feel that they no longer need public funds and that the company has far higher value than what the market is willing to pay for it. Under such circumstances, they may want to delist the shares.

Compulsory delisting – Permanent removal of securities of a listed company from a stock exchange as a penalizing measure of the stock exchange for not making submissions/complying with various requirements set out in the listing agreement which the company signed with the stock exchange at the time of its initial listing.

Some of the causes for compulsory delisting:

Voluntary delisting – The company voluntarily decides to permanently remove its securities from a stock exchange.

Some of the causes for voluntary delisting:

What Happens to Shareholder When Delisting Occurs?

Ownership: it is not mandatory for a shareholders to tender his ownership right i.e. his share. The shareholder can keep holding his share and the company must treat each shareholder with equality with regard to dividends, rights, bonuses and matters related to voting etc. The only thing which changes is that the shareholder will now find it hard to look for buyers in the absence of an actively traded market for his shares.

Decline in Liquidity: liquidity refers to the availability of buyers and sellers in a particular stock. When shares of a company get delisted, they mostly trade in grey market and hence it becomes difficult to match buyers with sellers. In fact, besides helping companies raise funds the other important reason for the very existence of regulated stock markets is to provide liquidity for equity shares thereby helping in valuation and price discovery for the company.

Impact on share price: before shares of a company get delisted, an announcement is made to the market.

Fun Fact: Back in the old days when demat services were not available, physical share certificates of bankrupt companies were regularly sold as scrap paper (raddi) and would fetch a good price thanks to their quality and thickness.