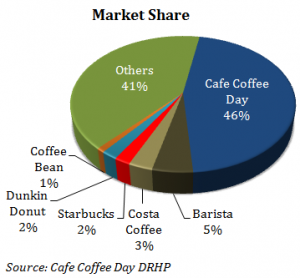 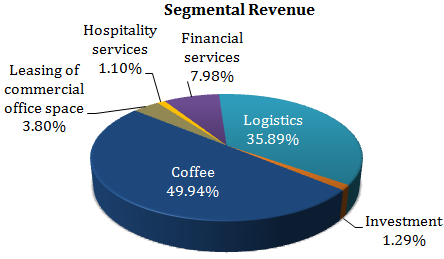 [3] The Company is operating in losses (on consolidated basis) for the previous 3 financial periods.

* EPS is not annualized.

[6] Debt to Equity ratio stood at 3.87 (based on the most recent debt and net worth figures disclosed in the DRHP).

India has traditionally been a tea drinking nation. Per capita consumption of coffee has been ~ 110 grams per year in comparison with developed countries where coffee consumption is substantially higher. With growing influence from coffee chains like Cafe Coffee Day, Starbucks, Costa Coffee etc., coffee consumption and socializing at coffee shops is increasingly becoming popular in India.

On the back of young population, increasing proportion of working age population, and higher disposable income, the size of the organized Cafe market is estimated to grow to Rs. 151 billion by 2020 at a CAGR of 15% (Source: Company’s DRHP).

Cafe Coffee Day has been the pioneer in establishing coffee culture in India with the very first outlet back in 1996 in Bangalore, followed by Barista in 2000. Cafe Coffee Day faces competition from both local and international players in terms of price, product offerings, and ambience of outlets for coffee, food and beverages. The competitors range from large and established companies to emerging startups and unorganized small food and beverages vendors. Primary competitors in include Starbucks, Costa Coffee, Barista, Coffee Bean and Tea Leaf and other local Cafes.

Shares will be issued in accordance with the Issue of Capital and Disclosure Regulations (ICDR) issued by SEBI as applicable to loss making companies –  Accordingly, shares would be offered to public investors through a book building process wherein 50% of the net issue would be allotted on a proportionate basis to Qualified Institutional Buyers (QIB). Up to 5% of the QIB portion (excluding the anchor investor portion) will be reserved for domestic mutual funds. Not less than 35% of the net issue (or net issue less allocation to QIBs) would be available to the retail investors.

[1] Leadership Position – Cafe Coffee Day enjoys a leadership position in the organized Cafe chain outlet business with 46 % share (based on number of outlets). As of December 31, 2014, the Company operates through 1,472 outlets across 209 cities followed by Barista with 169 outlets. The Compay has been very aggressive in expanding and has approximately four times the number of stores as compared to the next top four brands put together as on December 31, 2014. In addition, the Company also has 590 Coffee Day Xpress kiosks across 12 cities, 42 CCD Lounges across 7 cities, and 7 CCD Square outlet across 7 cities.

[2] Low Price Strategy – Cafe Coffee Day with the highest number of outlets and competitive pricing has been able to achieve better consumer penetration and strong connection with the young consumers and has consciously kept its pricing on the lower side of the pricing scale.

[3] Financial Performance: Coffee Day’s recent financial performance has not been so impressive. The Company has reported losses consecutively for 3 years.  Financial numbers for FY2015 are available for 9 months only. However, it is unlikely that the Company posted profit for full year since nine months losses stood at Rs. 75.20 Cr.

The Company derives 80 % of its revenue from its 2 businesses – Coffee (45.29%) and Logistics (33.67%) (See breakup above). The Company’s non coffee businesses particularly – hospitality and financial services have posted losses consecutively for last 5 years. Yet the Company in its DRHP has mentioned its intention to invest in the development of its financial services and hospitality services segment to drive better financial and operational performance.

The Company has not declared any dividends during the last five financial years and is most likely to use its future earnings for expansion and repayment of debts.

[4] Exiting Investors/Shareholders: Coffee Day can boast of some reputed names in its list of existing shareholders. Currently, the total number of shareholders is at 22. Promoter of the Company, V.G. Siddhartha, hold 54.78%. Some of the other investors include: Infosys co-founder Nandan Nilekani (1.77%), private equity firm KKR (3.43%) and Rakesh Jhunjhunwala (0.24%).

Top 10 Shareholders as on the date of filing of DRHP

The Company could be an interesting story purely on the basis of business outlook for coffee business of Cafe Coffee Day chain. Will update once there is clarity on valuation and pricing details.