The Cement Industry in India plays an important role in the development of economy because of its strong linkages to other sectors including construction, transportation, power and coal. The pricing and distribution of cement was earlier controlled entirely by the Government. This licensing regime came to an end in 1991 under the Industrial (Development and Regulation) Act, 1951. India is the second largest cement producer in the world after China with a current production capacity of around 370 MT which is expected to grow to 550 MT by FY 2020, according to Ministry of External Affairs, Govt. of India. Currently, the industry comprises of 190 large cement plants and more than 350 small cement plants.

The industry is facing excess capacity situation since the last many decades, resulting in lower capacity utilization of cement plants. The country’s present cement demand is only about 300 MT per annum, which is projected to increase at a CAGR of more than 8 % during FY 14-16, as per ‘Indian Cement Industry Outlook 2016’. Excise duty rates levied on cement are one of the highest and next only to luxury goods and cars. Currently, the rate of excise duty applicable on cement is 12% + Rs.120 per MT.

Housing industry is the biggest consumer of cement, accounting for about 64% of the total consumption, followed by infrastructure (17%), commercial construction (13%) and industrial construction (6%). 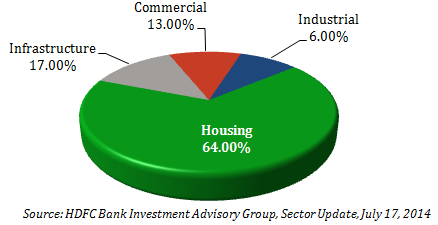 While demand from the housing industry is declining with new house construction activity slowing down due to a current oversupply, cement demand is likely to improve on the expectation that the new government will bring about a structural change in the economy which is likely to speed up economic growth. The new Government has exhibited its intention of focusing on providing affordable housing and rapid development of infrastructure, development of 100 new smart cities with better facilities including better connectivity and highways. Further, Government has planned to increase its investment in infrastructure to US$ 1 trillion in its 12th Five Year Plan i.e. 2012-2017.

All these steps/measures are expected to increase the construction activities in the country thereby positively impacting the demand for cement. We believe that cement stocks in India like Ultratech, ACC and Ambuja will benefit from the proposed boost to infrastructure projects. These government measures are likely to facilitate more investments in sectors which create the most demand for cement.

Major Players in the Cement Industry

The Indian cement industry is dominated by a few companies. The top 20 cement companies account for almost 70 % of the total cement production of the country. Top 3 players in the sector include Ultratech Cement (18%) followed by Ambuja Cements (10%) and ACC (9%).

The cement industry in India is divided into five regions: north, south, west, east and the central region. According to the Ministry of External Affairs, Govt. of India, southern region has the highest installed capacity, accounting for about one-third of the country’s total installed cement capacity. 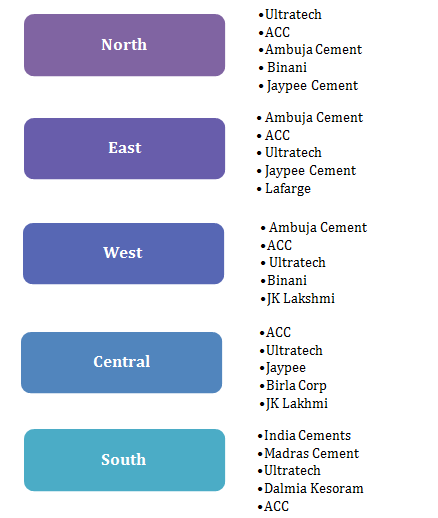 Current Prices of Cement Stocks in India (in the Listed Space)