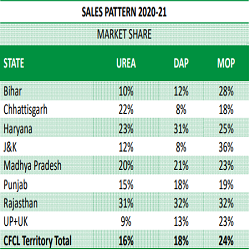 Chambal Fertilisers & Chemicals Limited (“Chambal” or the “Company”) manufactures ammonia, urea, pesticides and other products for farming and other agricultural applications.

The Company accounts for nearly 13% of the total Urea produced in the country. Its three hi-tech nitrogenous fertiliser (urea) plants are located at Gadepan in Kota district of Rajasthan. The three plants have an installed annual production capacity of about 3.4 million MT of Urea.

The Company caters to the need of the farmers in ten states in northern, eastern, central and western regions of India and is the lead fertiliser supplier in the State of Rajasthan, Madhya Pradesh, Punjab and Haryana. The Company has a vast marketing network comprising 15 regional offices, 3,650 dealers and 50,000 village level outlets. The company holds highest market share among private sector Urea manufacturers in the country. The company has further strengthened its position as lead fertilizer manufacturer in India after the commissioning of Gadepan III plant. 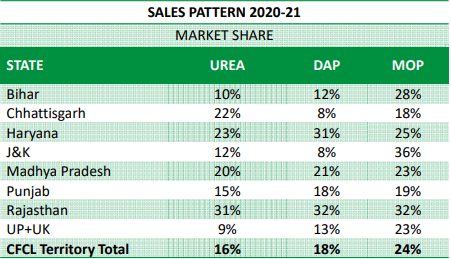 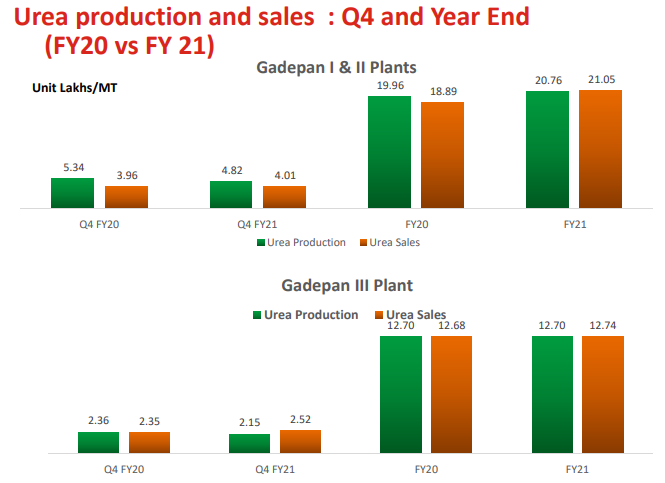 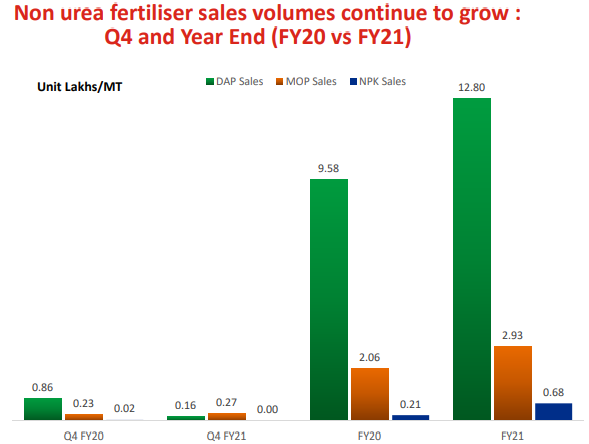 In line with CFCL’s strategy of enhancing thrust on non-urea fertilisers, sales of DAP, NPK and MOP fertilisers grew strongly in the year.

Sales of P&K fertilisers through POS machines higher by 38% during the current FY as comparison to previous year, reflecting better demand from farmers.

Chambal Fertilisers is the largest private player in the urea industry in India by production capacity. Its share in total domestic urea production increased to 16% in FY 2021 from 13.4% in FY 2020, driven by ramp-up of its Gadepan-III plant (around 100% plant utilisation). Share in the North India market is significant, supported by strong brand (Uttam) and a robust distribution network. Favourable location of plants (near end-user markets and feedstock source), large capacity and low energy consumption are added advantages. The urea plants are near the Hazira-Bijapur-Jagdishpur gas pipeline, thereby ensuring gas availability.

Three plants of the Company located at Gadepan in Kota district of Rajasthan operates with an annual production of more than ~3.3 million MT of urea.

The additional subsidy received from the government was utilised to repay the entire working capital borrowing (including commercial papers; around 50% of the total debt as on March 31, 2020). Adjusted debt to adjusted net-worth is estimated below 1 time as on March 31, 2021 (2.9 times as on March 31, 2020). Debt protection metrics are also expected to improve significantly due to lower interest outgo from fiscal 2022 onwards. Adjusted interest coverage and net debt to OPBDIT ratios are expected to remain above 10 times (4.3 times in FY 2020) and around 1.5-1.6 times (4.9 times as on March 2020), respectively, in FY 2022.

On May 2021, the central government has announced an increase in the subsidy for di-ammonium phosphate fertiliser to Rs1,200 per bag from Rs500 per bag. The price of fertilisers is increasing amid higher prices of raw inputs like phosphoric acid and ammonia, among others.

Zuari Global Limited holds 14.18% stake in the company and has pledged 76.61% of its holdings. On 16th June 2021, the pledge created by Zuari Global Limited on the equity shares of Chambal Fertilisers and Chemicals Limited has been released by IIFL Wealth Prime Limited (earlier known as IIFL Wealth Finance Limited) due to restructuring of loan availed by Zuari Investments Limited from IIFL Wealth Prime Limited. Therefore, the excess shares on account of restructuring have been released.