Over the past few weeks the entire world’s attention has been focused on crude oil prices. Some countries are benefiting immensely from the recent meltdown in crude oil prices while others are being slowly driven towards bankruptcy.

Countries Benefiting – All countries which rely on crude imports. Mainly India and China.

In addition to new oil discoveries in the United States, many factors have led to a fall in crude oil prices. Read: Fall in Crude Oil Prices – Discovering Sustainable Levels

As far as Organization of the Petroleum Exporting Countries (OPEC) member countries are concerned, they are all selling crude way below the price at which they would like to. The chart below sums up the situation – 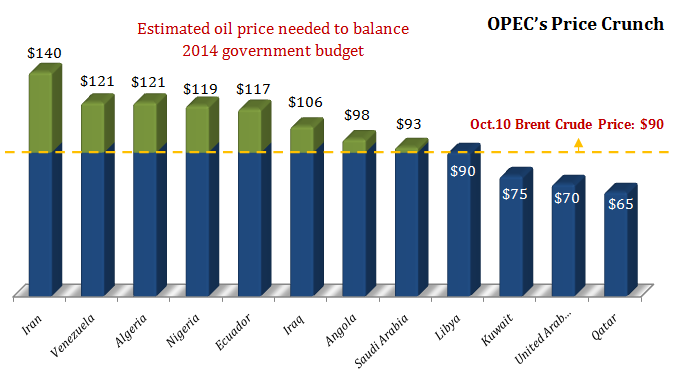 There are two aspects to this.

First – At what cost do OPEC countries produce crude oil (i.e. the price at which they get it out of the earth or their cost price).

Second – How long can they sell crude at such low prices?

[I] Cost of Production

In theory, trade deficit aside, they can keep selling oil at any price higher than their cost price. That said, while they should try to balance their trade deficit by increasing their exports and reducing imports in other areas – selling oil at a higher price seems lot easier. An easy way to achieve higher oil prices is to reduce supply at least temporarily until a demand-supply balance is achieved at US$ 90-100 levels which is the ideal price for Brent crude for most OPEC nations.

Despite this, stronger members of the OPEC club particularly Saudi Arabia blocked a proposal to cut oil production at the recent meeting of OPEC members in Vienna. Given that most OPEC countries are unable to balance their internal budgets (see chart above), this seems particularly odd. While one may accept Saudi Arabia’s official stance against a production cut – “We won’t cut production alone, we won’t be the first ones to do it”, there are many theories doing rounds as to why OPEC may have refrained from cutting production, most popular one being – the United States may have lobbied against production cuts to punish Russia for its aggression against Ukraine. Russia has significant dependence upon crude oil imports to balance its budget. In addition they are already suffering from E.U and U.S. Sanctions.

Another argument being extended is that OPEC wants to keep the prices so low that it becomes uneconomical for American companies – where newer oil discoveries are being made, to drill out more and more oil.

To appreciate this argument better, note that the American oil boom is due to an increasing use of technology to drill out oil from between rocks. This makes the price of producing oil higher than the price at which conventional oil can be drilled out. For example, while it may cost in excess of US$ 60 to produce oil by using the technique of fracking, oil in the Middle East could be extracted for under US$30.

Irrespective of the reason, oil prices will not remain where they are for very long. While stronger members of the OPEC club like Saudi Arabia will be able to sustain lower crude prices in the short term, eventually economic realities are likely to force them for a production cut. In addition, American companies could equally get temporary funding by their government to keep producing oil domestically, in which case it could become a case of ‘who blinks first’.

How can India benefit from low crude oil prices?

Countries like India who rely heavily on crude imports should use this situation to create a strategic oil reserve while the prices remain low (India imports 80% of its crude oil requirement).

Not only India but all oil importing countries have a great opportunity of ramping up their oil reserves while OPEC fights it out with the Russians or the Americans or whatever else that is keeping oil prices at these levels.

China is already building its strategic oil reserve – Read here. While I am sure that the government of India is thinking about this, the most substantive article I read on this was one where the finance ministry and the RBI were looking for ways to hedge crude imports. While it may be a good idea to make quick profit by betting on crude’s volatility – I wonder why we should not accumulate crude @US$ 70  a barrel – for it is anyone’s guess where the prices will eventually reach.