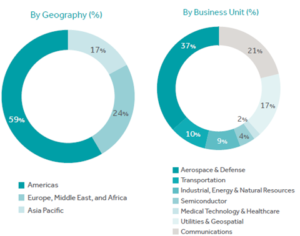 Multibagger Stock For the Month of February 2018 – Cyient Limited

Founded in 1991, Cyient Limited (Cyient or the Company) provides geospatial and engineering design, information technology (IT) solutions, and data analytic services in India and internationally. The Company was formerly known as Infotech Enterprises Limited and is headquartered in Hyderabad, India. The company operates in four segments:

Cyient is a market leader in Engineering Services in the Aerospace and Railways verticals, which constitute up to 50% of its total revenue. Its strong relationships with clients and years of experience has helped Cyient sustain its leadership position in engineering services segment.

Driven by a focus on industry and geographical diversification, the company has experienced a revenue growth of 16.3% for FY 2017. This is commendable given the ongoing slowdown in the IT services industry over the past few years.  It has also sustained robust revenue growth momentum in the last five years with a CAGR of 18%.

The Company has achieved this growth across geographies and industries. The company achieved growth on all measures of profitability, with net profiT showing double-digit growth of 11% and the five-year CAGR standing at 18%. The dividend payout for the Company stood at 30% for FY 2017. As of 8th February 2018, dividend yield stood at 1.7% which is very good for a growing technology Company.

For the Nine Month period ended 31 December 2017, Cyient’s revenue grew ~ 7% which is a higher growth rate than most industry peers.

The company is in a spree of acquiring tech based companies across the globe. List of major acquisitions done over the past 15 years:

The above acquisitions were in-line with the core competency of the company which includes aerospace engineering, defence, technology and IoT. Along with these acquisitions, there were two amalgamation transactions that took place between 2015-2016. Softential Inc. was amalgamated with Cyient Inc. and Infotech Geospatial Pvt. Ltd. W.e.f. 1st April 2015. The above aquisitions further strengthen Cyient’s U.S. operations, a market where Cyient gets ~ 59% of its revenue.

Turnaround in IT Sector

Over the past few years, IT sector worldover and in particular in India has witnessed a slowdown. Increasing competition and protectionism in the United States (which is the biggest market for Cyient in terms of revenue) has had a negative impact on foreign IT companies operating in that geography.

IT companies in India have adjusted to the initial hiccups created by digitization and automation, and are now better placed to cater to digitization requirements of clients. Talks of raising of minimum H1-B salaries and reducing the number of H1-B visas resulted in higher expense for Indian IT companies since employee salaries are the biggest expense item for these companies. All this resulted in margin erosion and negative sentiment for Indian IT. At current valuations IT Sector stocks in India are most attractive. Further, not only have managements for most IT Companies suggested a positive outlook going forward, there is a noticeable revival in both – deal pipleline and IT spends for most corporates. Cyient in particular is best placed to advantage from this pick-up given its impetus on digitization and its niche area of operations.