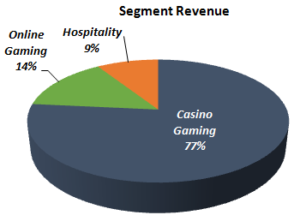 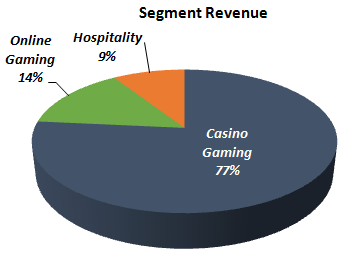 Delta Corp Limited (“Delta Corp” or the “Company”) is the only listed company engaged in the casino (live, electronic and online) gaming industry in India. The Company currently own and operate casinos in India, in the states of Goa and Sikkim, offering approximately 1,800 gaming positions. In addition, the Company has also ventured into the fast-growing online gaming space through our acquisition of Gauss Networks Private Limited, which operates the online poker site ‘Adda52.com’. The Company operates Deltin Royale and Deltin JAQK, amongst the country’s two largest offshore casinos, and Deltin Caravela, the only floating hotel with a casino in India.

The Company also owns and operates the Deltin Suites, 106 rooms, all-suite hotel with a casino located in Goa.

Delta Corp also operates the Casino Deltin Denzong located at the Denzong Regency hotel in Gangtok, Sikkim. Own and operate The Deltin, a 176 room five-star hotel in Daman, which is an integrated resort with a proposed casino.

Largest and the Only Company in the Organized Gaming Market in India – First mover advantage. The Company operates in all the casinos allowed locations – Goa, Sikkim and Daman. Nepal Casino, which is expected to be operational in the next 60 days.

Ace Investor – Rakesh Jhunjhunwala holds 7.38% of the Company and sits on the board as Non-Executive Director.

Strategic investment of U.S. $10 million in Jalesh Cruises – Delta’s subsidiary, Gaussain Software, has acquired a 25% stake in Essel Group-promoted cruise business, Jalesh Cruises Mauritius Limited. The investment is capped at U.S. $10 million. The cruise will have 25-30 tables for casino operations, for which DELTA will pay a fixed fee of U.S. $5 per person to Jalesh Cruises. The cruise will operate for eight months in India and four months in the UAE.  This is expected to generate revenue of Rs. 25-30 Cr. per year for the company.

Focus on Online Gaming – The management is aggressively focusing on online gaming as it could be the next big thing, with growing internet penetration and the availability of online payment options. Delta has already acquired Adda52.com, a poker website. It has invested Rs. 15.5 Cr. in Halaplay, a platform which provides leagues in all international and domestic cricket, T20s, World Cup, Kabaddi etc. Halaplay will benefit from the ongoing IPL contest and the upcoming Cricket World Cup 2019 and Cricket T20 World Cup.

Gaming Regulations – The Goa, Daman and Diu Public Gambling Act, 1976 allows on-shore casinos to be set up only at 5-star hotels or off-shore vessels with prior permission from the government. The State Government has the authority under law to issue licenses and rules to regulate casinos. Gaming tax has been now included under GST and the applicable rate is 28%