India’s two-wheeler industry will continue to experience increase in demand, for many reasons. Firstly, the country’s aspirational youth and their high disposable income is a significant growth driver. Secondly, growing rural income across India has increased the two-wheeler sales. Finally, poor public transport and an urgent need to avoid urban congestion have increased need for a quicker and more affordable mode of transport. 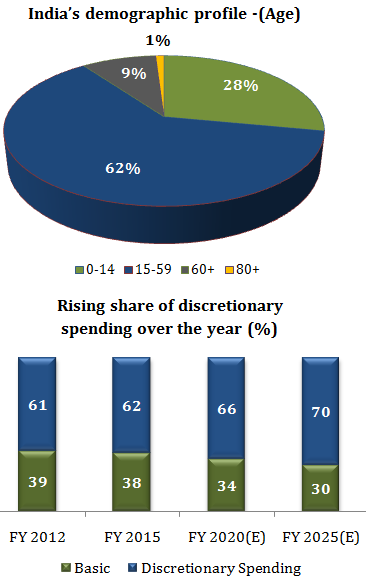 Royal Enfield range of motorcycles is able to address a unique mix of appeals – from its traditional customer base to urban, aspiration-driven youth. Royal Enfield’s product line up in India includes the Bullet, Classic and Thunderbird models in 350 and 500cc along with Continental GT 535 cc and the newly launched Himalayan powered by the new 411cc engine. Royal Enfield operates through 14 company-operated stores and more than 605 dealers in all major cities and towns in India, and exports to over 50 countries across the world including the USA, Japan, UK, several European and Latin American countries, as well as the Middle East and South Asia. 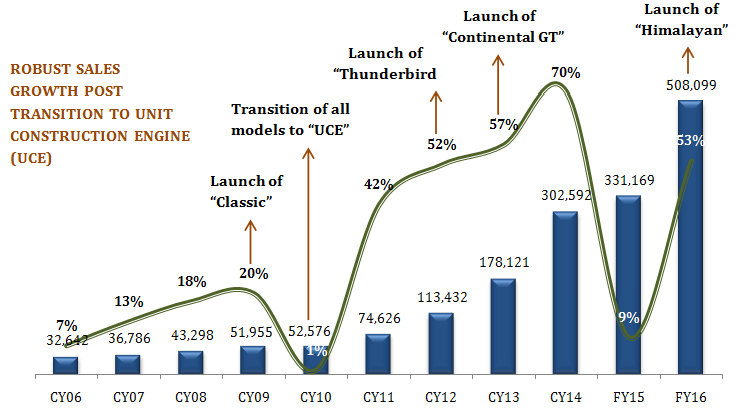 Currently, Royal Enfield exports a very small portion (~9000 units) of its annual volumes due to capacity constraint and limited relevant product portfolio for exports market. Eicher Motors has recently started executing its export strategy, and is opening exclusive stores in markets of Latin America, Indonesia, London, Paris, Madrid etc. We believe that export market can be a meaningful contributor to volumes in the coming years given the huge opportunity size and differentiated positioning of Royal Enfield.

The Government of India has been focusing on improving road infrastructure through the National Highway Development Project (NHDP) and Pradhan Mantri Gram SadakYojna (PMGSY). Under the NHDP, the plan is to upgrade, widen and strengthen 55,000 km of road network. The PMGSY envisages development of 368,368 km of rural roads.

This improved connectivity presents a significant opportunity for Eicher Motors with its wide product range in commercial, utility and passenger vehicles. Also, there is positive effect in terms of demand for both cargo and passenger segments from newly connected rural areas. Further progress in road development work including sanction of new projects will help to sustain growth in the CV industry. During Q2 FY 2017, Eicher Motors launch several new products.

In the coming years, Eicher will be launching more new variants of Eicher Pro 6000 series of heavy-duty trucks and Eicher Pro 3000 series of light and medium duty trucks, to cater to the fast growing segments in the market.

Eicher Motors has a wide distribution network spanning across India. Currently, it has a distribution network of 467 dealers in India. Royal Enfield operates through 14 company-operated stores and more than 605 dealers in all major cities and towns in India, and exports to over 50 countries across the world including the USA, Japan, UK, several European and Latin American countries, as well as the Middle East and South Asia.

Further, in India the Company spends negligible amount on television and print advertisements and yet has created for itself a powerful brand recall, thanks to the self-serving brigade of Royal Enfield bikers.

Eicher Motors faces inability to timely ramp-up its production to meet market demand and planned growth. Royal Enfield waiting period for Classic (which accounts for ~65% of domestic RE volumes) stood at ~ 3 months while other models had a waiting period of 1-1.5 months on an average.

Any major competition in the 350cc-600 cc bike category by other players like Bajaj Auto, Hero Motocorp and many foreign players like Harley Davidson etc., may affect the demand of the Company’s product provided the price gap is not more in comparison to Royal Enfield bikes.