Let’s assume that many countries become self sufficient for their crude oil requirements. In such a situation crude oil will become like any other domestic commodity (think of cotton or sugar) and its market price will be determined by similar various domestic and international factors.

Given that India has amongst the cheapest labor anywhere in the world, it will give a huge advantage to Indian oil exploration companies if this were to happen. However, better technology and superior quality of oil will also play a big part to the whole equation.

Production, Consumption and Import of Crude Oil in India 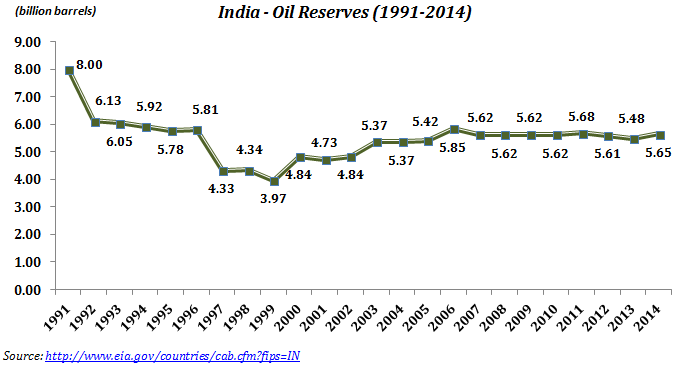 FACT: India is the 4th biggest oil consumer in the World. 81% of India’s crude oil requirements are met by imports.

Let’s look at global trends to understand whether crude oil prices are sustainable at these levels.

While it may seem that the world is producing just about enough oil to meet the global consumption the trends are changing. Until a few years ago OPEC nations served as the main oil suppliers to most of the world and hence international crude oil prices were largely influenced by developments in that part of the world. Over the last 5-7 years however this has changed significantly as you can see in the global oil production pie chart above.

In particular, the North American region has emerged as a big oil producing part in the world. No surprise then that there is a growing clamor to allow American oil companies to start exporting oil. With more oil reserves coming up in the world, prices are likely to remain subdued in the short term and will eventually start getting determined more by the quality and cost competitiveness of production. Over the longer term, oil production in countries outside of the OPEC region will also play a significant role in determining international crude oil prices.