Founded in 1931, The Federal Bank Limited (“Federal Bank” or “Bank” or “Company”) is engaged in commercial banking activities in India. The Bank classifies its business in four segments:

Total Deposits for Federal Bank have increased at a CAGR of 70% since FY 2013 with major spur in deposits during the period between FY 2016 and FY 2017.

Non-Performing Assets (NPA) are currently weighing down most public as well as private sector banks. When compared with best of industry players, Federal Bank’s NPA levels have been pretty much under control.

In fact, only Federal Bank’s Gross NPA % has fallen as compared to FY 2013 (in FY 2017). For the rest, it has either risen or has remained same. ICICI, Axis, Yes Bank and Kotak Mahindra banks have all reported consistently higher NPAs.

CASA ratio and NIMs are two very decisive factors for a bank. A higher CASA ratio is preferred as it reduces the liability of the banks to pay interest on the deposits. Similarly, a higher NIM is preferred as it reflects that interest income earned is higher than the interest paid out. On both the grounds, Federal bank proves to be very competitive in comparison to higher valued peers. 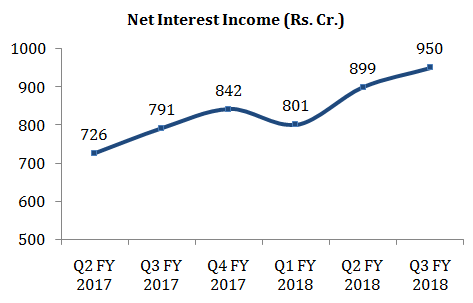 As per the current trends and recent performance, Federal Bank stock is a good buy. With stronger profit growth, lower NPA% and expansionary developments in the online segment, the Bank is at a robust position. It is very competitive when compared with its large cap peers as well. Income growth is strong and continuous.