8 years for a meager 24% return is disappointing to say the least. Even a simple fixed deposit in a bank would have delivered 100% return during the same time (considering 9% interest rate compounded quarterly). Most of this 24% return came in the past 16 months, i.e. since April 2014. As everything seemed like it was getting back on track for equities, there started worries of slowdown in China and the U.S. markets peaking. Europe of course has not started showing any improvement in production. To make matters worse, Middle East has started withdrawing funds from around the world due to softening of crude prices.

With a rather gloomy picture being projected by most analysts, we decided to do some analysis of Nifty companies to compare them on 3 parameters: (1) Market capitalization; (2) Debt and (3) Earnings growth, based on metrics from 2008 and 2015.

Note: Companies marked in red indicate those where current market capitalization is less than current debt.

Data in the table below compares the current total debt of the constituent companies of the CNX Nifty 50 Companies with their debt position in FY 2008  (excludes banking companies and HDFC). 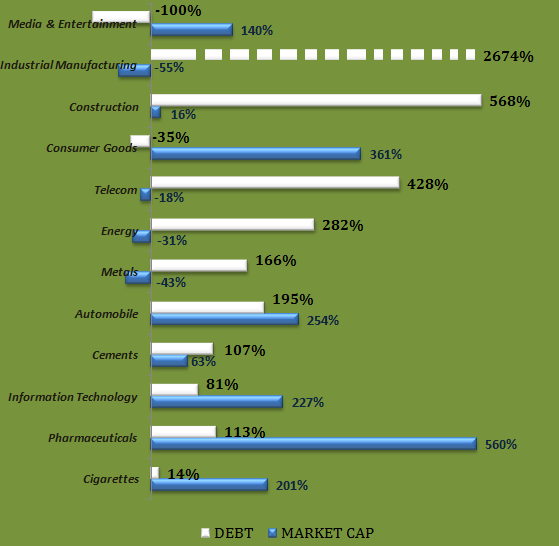 Corporate earnings for Nifty companies has grown only 1.5 times over the past 8 years, resulting in lack of interest in equities. While lack of interest was to be blamed for not buying into Indian stocks until April 2014 when price to earnings ratio of Nifty was at 18.91, today the situation is vastly different with the Nifty PE ratio at 22.17 (as of 31st August 2015).

Since April 2014, while stock prices are constantly rising, corporate earnings have been falling consistently, that’s a fall for 4 straight quarters.

The last time we witnessed negative earnings growth in 4 consecutive quarters before Q1 of 2016 was way back in Q2 of 2010.