India’s population today is 1.237 billion and growing at 1.3% every year. This makes India the second most populated country in the world with China leading the charts with a population of 1.35 billion.  According to the most recent census survey, India occupies 17 % of the world’s population and 65 % of these people are below the age of 35. 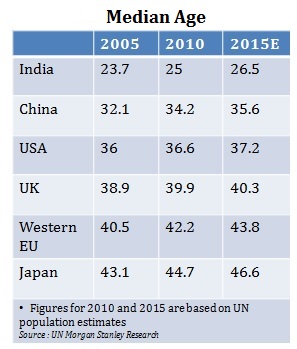 For years, such large population weighed heavily on the country’s available resources. Over the years, a lot of emphasis was placed on skill development and basic education. Today, a large part of those, who are below the age of 35 are educated and skilled. Over the next 4-5 decades, India’s young population will transform the country’s overall demographics further. A majority or people between the ages of 10-19 are all getting access to basic education. I should also add the fact that English is widely spoken and understood unlike in some other countries, which gives an edge particularly to the service sector of India.

In fact, a major push to India’s growth came from the business processes that were outsourced to India mainly between 1996 -2005. Shashi Tharoor, India’s minister of state for human resources said sometime back, “If we get it right, India becomes the workhorse of the world”.

With the kind of emphasis India is putting on skill development and higher education, over the next few decades, India could become to service sector, what china is for manufacturing. What started essentially as a cost effective software outsourcing industry has today transformed into a full time back office function for a large number of western businesses. Many of these businesses are continuously working on training their local staff and have made long term investment plans in the country which is a very positive sign for the future prospects of Indian economy.

It is expected that by the year 2025, up to 70% of Indian population will be moderately skilled and will of working age. Given the differential in wage differential, the country will keep attracting more service oriented work.

For businesses which are looking at an inbound investment into India, a ‘young’ economy with growing disposable incomes and greater exposure to western lifestyles is a fascinating prospect.

More jobs in future will result in higher wages which will further boost the domestic consumption in the country. As more and more people in India climb the social ladder, their demands and aspirations for better facilities will boost spending in most sectors like housing, automobiles, consumer goods, electronics etc. 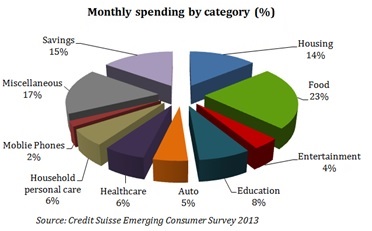 By many measures, the domestic story in India is fast replacing the initial boom that was created by the influx of foreign capital. In fact, it was due to the higher dependence on internal consumption that India was less impacted by the global financial crisis of 2008 -09 (70% of GDP is contributed by personal + Government consumption).

As an investor, if you are positive on the future prospects of Indian economy, then consumption oriented sectors like FMCG, pharmaceutical, consumer durables etc., will still prove to be one of the best place to invest your money for the long term, despite their current high valuation.