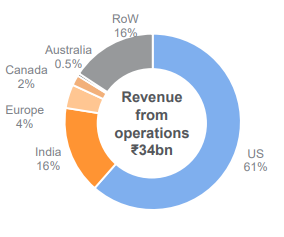 Gland Pharma Limited (“Gland Pharma” or the “Company”) has grown over the years from a contract manufacturer of small volume liquid parenteral products, to become one of the largest and fastest-growing injectable focused companies, with a global footprint across 60 countries, including the United States, Europe, Canada, Australia, India, and other markets.

Gland Pharma operates primarily under a business-to-business (B2B) model and has an excellent track record in the development, manufacturing, and marketing of sterile injectables.

The Company has a wide range of injectables, including vials, ampoules, pre-filled syringes, lyophilized vials, dry powders, infusions, oncology, and ophthalmic solutions, and also enjoys the distinction of having pioneered Heparin technology in India.

Domestic Market – Domestic market sales remain steady and have shown 19% growth in FY21. The Company ramped up Remdesivir supply for the domestic market considering the requirement for Indian patients.

Extensive Portfolio of Complex Products – Present in sterile injectables, oncology and ophthalmics, and focus on complex injectables, NCE-1s, First-to-File products and 505(b)(2) filings.

Total Capex incurred during FY 2021 was Rs. 228.8 Cr. compared to Rs. 194.7 Cr. for the previous financial year. The Company is expanding its sterile injectable facility located in Hyderabad. It is also enhancing its production capacity for APIs in Vizag and adding capacity in its oncology facility to take care of the planned launches in forthcoming years. Additionally, the Company will be investing in the drug substance and biologics facility for creating robust infrastructure in vaccine and bio-similar space.

The Company’s core markets consist of the US, Europe, Australia and Canada. Collectively, these countries/core markets constitute around 68% of the company’s overall FY2021 revenues. Gland’s revenues from core markets grew by 22% for FY2021 with US sales growing by 21% to Rs 2126 Cr. and constituted around 90% of the core market revenues. Growth could be largely attributable to the volume pick up in existing products coupled with new product launches such as – Micafungin, Bivalirudin and Ziprasidone offering a significant addressable market opportunity.

The Company has a strong product pipeline in the US with a total of 284 ANDA fillings done as of FY2021 and of these, Gland has received an approval for 234 ANDAs while 50 are awaiting approval. In FY2021, Gland received approvals for 32 ANDAs and launched around 28. Going ahead, the Company expects to launch around 35 molecules in FY2022 and looks to file around 20-22 ANDAs including the complex molecules.

The Company has entered in to an arrangement with the Russian RDIF to manufacture 252 million doses of the latter’s COVID-19 vaccine – Sputnik V. Gland Pharma has entered in to a technology transfer arrangement and has consequently acquired assets of a biopharma company entailing an investment of Rs 90 Cr. Subsequently, the Company has also lined up an investment plan to tune of Rs 270 Cr. towards setting up the drug substance manufacturing facility and a fill n finish plant for the said vaccine contract. The contract is for the manufacturing 252 million doses of Sputnik V vaccine and RDIF is bound by the terms of the agreement for the offtake of the vaccine.

Factoring a price of $ 1.5 per dose of the vaccine and assuming a volume of 252 million doses, the total opportunity from vaccines translates to around Rs 2800 Cr. spread over the next two years, starting FY2022-end.

The Company follows a unique diversified B2B led model across markets globally. In the domestic markets, Gland follows a B2C model. Gland Pharma has an extensive portfolio of complex products, awaiting to be commercialized across markets. The Company is looking to build its presence on the Europe market through the inorganic route and is also open for an acquisition in the complex API space.

The Company is a niche player, focused on injectables. It has proven track record of growth and profitability along with a consistent regulatory compliance history. It has never received a negative USFDA report. The Company has extensive and vertically integrated Injectables manufacturing capabilities. US markets constitute a share of 67% of sales and, hence, a strong compliance track record augurs well. Improved demand traction and incremental capacities coming on-stream, provide ample visibility on growth ahead.

The recent arrangement of manufacture 252 million doses of Sputnik vaccine would just take the company closer to its long-term strategy to enter the lucrative Biosimilar space. Being an established player in the injectables, Gland is set to benefit from the rising preference for injectables