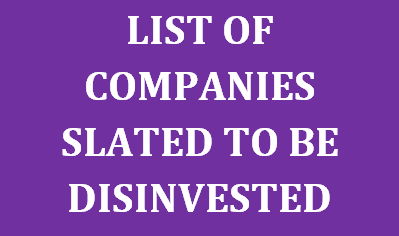 The Cabinet Committee on Economic Affairs (CCEA) had approved the strategic disinvestment of entire stake in BPCL and sale of the Government’s 63.75% and 30.8% stake in SCI and Concor, respectively, along with management control, to a strategic buyer.

How are Governement Disinvestment done?

In past, the Government has used ETF route aggressively to meet its disinvestment targets. Currently, there are 2 PSU ETFs in the market.

A word on underperformance: Over the last one year, the CPSE ETF has gained 0.85%, while the BSE Sensex has gained 12%.

In both these ETFs, there is no logical theme that has put together these companies other than the Government’s need to divest. The product has been an underperformer and has shown that government is not an efficient allocator of capital.

A word on underperformance: Over the last one year, the Bharat 22 ETF has lost 1%, while the BSE Sensex has gained 12%.

If you look at the list of companies which the Government has selected for disinvestment, you will (rightly) believe that many of these companies should not be disinvested at current valuation as they are currently trading at very low valuations. But the government has little choice other than disinvestment to cater to its growing fiscal deficit.

From the fiscal deficit standpoint, disinvestment proceeds will be key to bridge the revenue shortfall, given the lower-than-expected collections in Goods And Services Tax (GST) and the recent cut in corporate tax (from 35% to 25%).

Disinvestment Case of HPCL in 2018

The rationale behind this government’s disinvestment programme remains hazy. It would be perfectly understandable if the aim was to exit unprofitable, non-strategic businesses. BPCL, however is the second largest PSU oil marketing company that has been regularly reporting profits and has consistently paid a healthy dividend. The gross refining margins of BPCL refineries are matching the best in the global markets. The only logical explanation to this disinvestment is a hope that e-vehicles will become a reality over the next decade and that Government should not be marketing use of non-renewable sources of energy in future.

IRCTC IPO saw an overwhelming response and was listed at 101% premium at Rs. 644, against the issue price of Rs. 320 per share. The bankers failed to calculate the true value of the Company which completed eroded its valuation. If such a deal had been done in private sector, the bankers working on the issue would be out of business soon thereafter.

Disinvestment Process | Price/Valuation Has an Important Role to Play

In the disinvestment process, selling profitable ventures at a relatively low price is a normal phenomenon. This is because when a disinvestment proposal is announced, there is a declining trend in the share prices, driven by various stakeholders, which impacts valuation.

Disinvestment is not a bad thing. Privatization does lead to economic efficiency. Further, the Government should consider exiting loss making businesses on a case to case basis. The whole process however seems to be ignoring the following concerns:

The present Government’s policy of using PSUs as a potential source to mobilise funds to cover up fiscal deficit is short-sighted. In many cases, the Government should invest more in PSUs and make best use of them to reap a better harvest in terms of dividends.

That said, as retail investors you should selectively buy in companies slated for disinvestment.

Union Government has till date given in-principle approval for disinvestment of 33 Central Public Sector Enterprises (CPSEs).