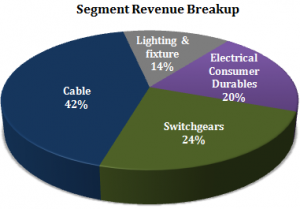 IN FOCUS BEFORE FY 2016 RESULTS

Havells India Limited (“Havells” or the “Company”) is a leading Fast Moving Electrical Goods (FMEG) Company with a strong global footprint. Havells is India’s second largest manufacturer of domestic and industrial cables with an annual manufacturing capacity of 11, 50,000 kms of cable.

The Company has shown consistent growth over the last 5 years (i.e. 2010-11 to 2014-15). Its net revenue from operations over this period grew at an impressive CAGR of 8.74%. The Company has reserves in excess of Rs. 1,818.18 Cr and operates with negligible debt on its books. The Company has a strong dividend history and has maintained an average dividend yield of 1.18% over the last 5 financial years. For FY 2015, the Company declared a dividend of 300 % i.e. Rs. 3.00 per share.

Havells India has a diversified product portfolio including – Switchgears, Cables, Lighting & Fixture and electrical consumer durables. The Company derives about 42% of its revenues from the cable division. 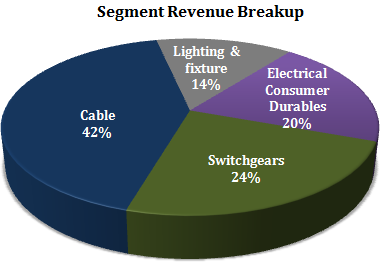 LED Segment – The Company has been working on the fast growing LED space. In FY 2015, the Company acquired Promptec, a Bengaluru based company in the solar LED street light space to strengthen its position in the growing LED market. The Company has dedicated facilities for LED fixtures lighting in Noida and Neemrana. The Company has higher margins on account of in-house manufacturing of LED luminaries, whose share in domestic lighting revenues currently stands at 27%. 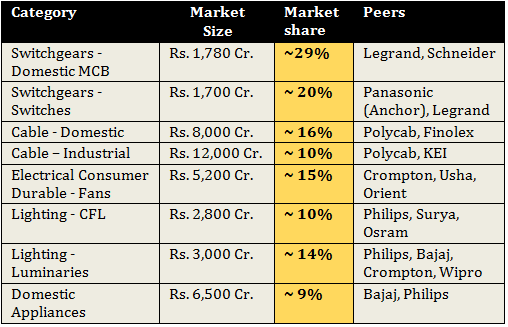 Revival in Demand from Industrial Segment to Drive Growth

In the FMEG space, Havells India has presence in three product categories, viz. domestic, modular and LV industrial switchgear. Havells has a leadership position in the domestic switchgear market and increased its market share aggressively from 15% in 2006 to 29% in FY 2016. The switchgear segment, largely dominated by the domestic MCB segment, contributes ~24% to revenues. The Company recorded revenue CAGR of ~13% in FY 2012- 9M FY 2016 largely due to new product launchs.

Another industrial category, the cable division, comprising industrial and domestic cables, contributes 42% of the Company’s revenue. With government initiatives in infrastructure development and capital expenditure in power sector further buoy the industry, growth trends to continue evolving amid increasing demand for reliable and energy efficient cables.

The Company has an extremely strong global presence across 50 countries with manufacturing units in China, Europe, Africa and Latin America apart from 12 manufacturing locations in India. Havells domestic manufacturing plants are located in Dehli NCR, Alwar, Baddi, Faridabad, Haridwar, Neemrana and Sahibabad. Havells India has a robust distribution network with over 335 plus Galaxy stores, 5600 dealers and more than 1,00,000 retail outlets in India. The Company is planning to increase its Galaxy stores to over 400 outlets by 2017.

*Havells India pioneered the concept of the branded exclusive Galaxy outlets to showcase and sell their range of brands directly to the consumer.

Havells India acquired Sylvania for a total consideration of €235 million in April 2007. The Company infused total equity of over €140 million to revive the Sylvania operations. However, rapidly changing technology in the LED lighting space and poor demand for lighting products in Europe (Europe contributes over 56% in revenue from lighting space) hurt the overall performance of the company.

Note – In January 2016, 80% stake sale for Sylvania was completed and the consideration has been received. The divestment will help reduce the uncertainty and earnings volatility for Havells consolidated financials. Havells has invested over Rs. 980 Cr. in Sylvania in 8 years. Going forward, the Company’s balance sheet will strengthen post Sylvania divestment.

Consumer electrical business is highly fragmented and there exists tremendous competition from both listed as well as private players like Finolex (in cables), Orient, Khaitan (in fans), Crompton, Bajaj (in home electricals), Philips, Osram, and Wipro (in lighting).