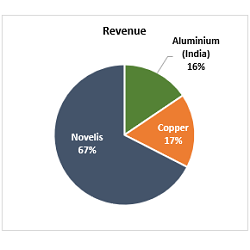 Hindalco Industries Limited (“Hindalco” or the “Company”) is an industry leader in aluminium and copper. Hindalco’s acquisition of Aleris Corporation in April 2020, through its subsidiary Novelis Inc., has cemented the company’s position as the world’s largest flat-rolled products player and recycler of aluminium.

Hindalco’s state-of-art copper facility comprises a world-class copper smelter and a fertiliser plant along with a captive jetty. The copper smelter is among Asia’s largest custom smelters at a single location.

Today, Hindalco ranks among the global aluminium majors as an integrated producer.

The Birla Copper unit produces copper cathodes and continuous cast copper rods, along with other by-products, including gold, silver, and DAP fertilisers. It is India’s largest private producer of gold.

Aluminium – One of the largest integrated primary producers of aluminium in Asia. With a pan-Indian presence that encompasses the entire gamut of operations, from bauxite mining, alumina refining, aluminium smelting to downstream rolling, extrusions and recycling, Hindalco enjoys a leadership position in aluminium and downstream value-added products in India.

Copper – Hindalco’s copper facility in India comprises a world-class copper smelter, downstream facilities, a fertiliser plant and a captive jetty. The copper smelter is among the world’s largest custom smelters at a single location.

[1] Novelis (including Aleris) – Novelis recorded its best-ever quarterly adjusted EBITDA of $505 million (vs $383 million), up 32% YoY, on the back of higher organic volume, favourable metal benefits, and a US$60 million EBITDA contribution from the acquired Aleris business.

[2] Aluminium India – EBITDA was at an all-time high of ₹1,610 crore in Q4 FY21, compared with ₹1,043 crore for Q4 FY20, an increase of 54% YoY, primarily due to favourable macros, better operational efficiencies and lower input costs. EBITDA margin of 27% was the highest in the last 12 quarters and continues to be amongst the best in the industry. Revenue was ₹5,969 crore in Q4 FY21 vs ₹5,299 crore in the prior year period.

[3] Copper – Copper Cathode production was at 97 Kt in Q4 FY21 (vs 75 Kt in Q4 FY20), higher by 29% YoY on account of stable operations during the quarter.  Revenue from the Copper Business was ₹8,508 crore this quarter, up 80% YoY, primarily due to higher global prices of copper.