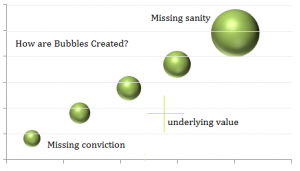 A few years back a friend of mine recounted his experience of working at a hedge fund from its inception in 2005 to its fall in 2008. The fund which crossed U.S. $ 1 billion at one point dropped in value to below U.S. $ 300 million in less than 4 months towards the end of the year 2008.

His was not the only firm which suffered. In fact, financial markets across the world plummeted before the reality of a stock market bubble dawned on governments.

Hang on – how could everyone lose money? Somebody must have made a profit? For one winner there must necessarily be one loser, no? Did the money just disappear from planet earth?

Who Benefits When a Stock Market Bubble Bursts?

Of course traders who bet on the markets to fall (i.e. bears) will make quick gains by short selling futures or by buying put options. This however does not have a bearing on the value of the underlying assets.

A financial bubble is “a situation where the price of an underlying asset rises far above its true value”. 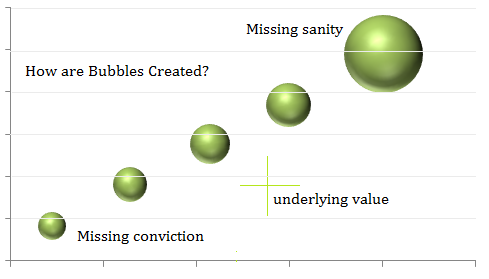 When stock market bubbles burst, it’s not like the money just disappears, it is something fundamentally different from this. It is a moment of realisation that the money never even existed. To explain with an example, during the subprime crisis of 2008, more than 80% of Collateralized Debt Obligations (CDOs) were downgraded from triple A to junk rating. People realized that these assets were not worth anything and yet they kept paying higher than the previous guy to buy them.

When demand for something starts exceeding its supply for whatever reason, the price for such thing starts rising. The price will keep rising until people realise that the underlying utilitarian value of the asset is not worth the money they are paying for it.

If demand increases because of genuine shortage in supply then things balance out over time when the supply is restored. When demand starts rising because of the future potential of the underlying and when such demand takes the price beyond ‘reasonable levels’, a bubble is created.

How are Stock Market Bubbles Created?

Just because there is an increase in the price of something does not mean that its value has gone up or that the price is real. Let me tell you the story of a spiritual guru in Delhi. When he started out in 2003 he charged Rs. 500 for personal consultations. As more and more people told stories of his connection with the other side and his magical healing power he started charging up to Rs. 5,000 for a consultation. These days he has become a celebrity healer and for the exact same consultation for which he charged Rs. 500; he commands in 6 figures. What has enlarged is not the quality or scope of his consultation but the stupidity of people.

Ideally one should pay for a stock based on the future earning potential of the company which is responsible for appreciation in stock price. Practically however stock prices move for only one reason – demand and supply exerted on the free float of a stock. Unscrupulous buying leads investors into believing that something big is afoot with the company and that the earnings will improve dramatically in future. This is the most common reason why individual stock bubbles are created.

At a macro level, bubbles are created either because of systemic failure to identify a false trend early on; or when there is a perception about newer technologies or modern systems changing the way things will be done in future. It could be that they are believed to increase productivity manifold or substantially cut costs. In such situations indiscriminate buying of future profit bearing assets takes place. People forget that production and consumption is directly proportional to populations.

How to Spot a Stock Market Bubble?

Think about it, if there was a full proof way to spot a bubble, it will never happen. While many a research has been done on this, no flow chart has ever helped in spotting a stock market bubble. Nevertheless for what it’s worth there are signs before a bubble bursts. Based on the dramatic crashes of past one could come up with ‘things to look out for’ which are mostly indicative of a melting down of sorts. If you can see spot more than half the points listed out below at any given point of time, you should be cautious as you are as close to spotting a bubble as anyone else ever has been:

[1] When prices risen beyond the average PE for the past 10-15 years. On a market wide basis, you could compare historic Nifty PE Ratio with current valuation to check this.

[2] A dramatic rise in the price of stocks for over 2-3 quarters. An even more telling sign is when this continuous rise witnesses bouts of sharp and deep selling in between.

[3] When people start giving stock tips to each other as a matter of routine – in offices, restaurants, gyms and in barber shops.

[5] When everyone starts making money in the markets.

[6] When you notice that television sets are by-default set to finance channels at public places like restaurants.