What’s Positive for the Stock?

The Company operates in 5 Business Divisions

[3] Ennature Biopharma – specializes in the development and manufacture of natural active pharmaceutical ingredients (APIs), nutraceuticals, natural food colours, standardized herbal extracts and spice extracts for the beverage, dietary supplement, pharmaceutical and cosmeceutical industries. This division has an integrated, multi-process-centric manufacturing set-up of 100,000 square feet, which can process about 2,500MT of raw material per annum.

[4] Natural gums –  guar based products are mainly produced for food, oil & gas and textile industries. The Company started operations in 2001 with a capacity to produce 7000 MT of guar gum powder per annum. Today the capacity has been scaled to 36000 MT.

[5] Spirits – The Company has a strong presence in the semi premium, regular and prestige segments within the whisky, rum, brandy, vodka and gin. The Company has 3 state-of-the-art distilleries in Kashipur (Uttarakhand), Gorakhpur (Uttar Pradesh) and Todarpur (Saharanpur, Uttar Pradesh) with a total distillery capacity of 280,000 KLPA. 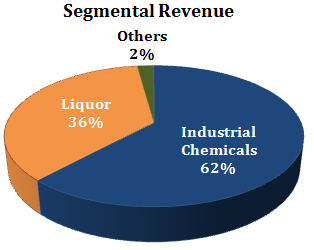 The Company is the largest manufacturer of Bio-Mono Ethylene Glycol (Bio-MEG) in the world made out of renewable feedstock i.e. Molasses and Ethanol. This helps the Company to generate better margins as compared to players producing MEG through petrochemicals route which is dependent on crude oil prices. MEG produced from molasses gives approximately 20% cost advantage to India Glycols. The Company’s division is capable of manufacturing 175,000 MTPA of finished products.

Bio-MEG has an application in making PET bottles, which is used for packaging of beverage products and polyester film.

India Glycols has become a qualified supplier to many large conglomerates worldwide for natural colors, nutraceuticals, health supplements and plant based Active Pharmaceuticals Ingredients (APIs). Over the years, the Company has established its name as a quality manufacturer and supplier with stringent quality control and quality assurance controls in place.

During FY 2016, as a result of taking several initiatives for improving functioning of the division, sales value of Ennature Bio-Pharma division increased to Rs. 79 Cr. as compared to Rs. 68 Cr. of last year registering a growth of over 16%. Both domestic & exports sales have increased. Also sale of existing products have increased with increase in the customer base and more usage from the old customers.

With growing awareness of beauty and health, the company’s presence in nutraceuticals and cosmeceutical sector, is likely to increase the revenue and profit margins in the coming year.

Obtaining a new license and setting up distilleries is time consuming and capital intensive. The production of liquor products in India requires manufacturers to obtain licenses from the respective state governments under the local state laws. These licenses determine the production capacity of each facility and are granted for a predefined price and time period.

What’s Negative for the Stock?

LOSS MAKING FOR THE LAST 3 YEARS

India Glycols financial performance has not been so impressive. The Company has reported losses consecutively for 3 years. The performance of the Company is affected due to steep fall in prices of the chemical products (the Company derives 62 % of its revenue from its chemical businesses.).

The Company has consolidated debt of Rs. 214.73 Cr. as of March 31, 2016; Net worth (Shareholder’s fund) stood at Rs. 254.41 Cr. as at March 31, 2016; Debt to Equity ratio stood at 0.84. The Company has not declared any dividends during the last five financial years and is most likely to use its future earnings for expansion and repayment of debts.

Liquor prices are controlled by state governments which revise them once every year.

Liquor companies cannot increase or revise the prices during the course of the year, irrespective of any rise in price of raw materials or under any other competitive pressures. The major raw materials for liquor companies is molasses and glass, the prices for both of which has been volatile. Additionally, Uttar Pradesh and Maharashtra are the source of a majority of the domestic molasses requirements. Most other states have imposed an import tax on molasses which puts further pressure on profitability margins of liquor companies, if there is a shortfall in a given year and the companies need to import from another state.

The Company may be too diversified for its size

For a Company with market cap of Rs. 350.02 Cr. (as of 17 November, 2016) and operating in so many verticals and product lines; hyper growth in profits may be difficult to achieve. Further, any deterioration in the demand for one product or segment could have a optimally negative impact on the overall performance of the Company.