In September 2017, the Company commenced trading of energy saving certificates.

Share of exchanges in short-term market (in billion units)

IEX and Power Exchange India Limited (PXIL) are the two power exchanges facilitating short-term trade of power in India. IEX dominates the space, with its share in total volume traded through exchanges at an average of over 93.5% 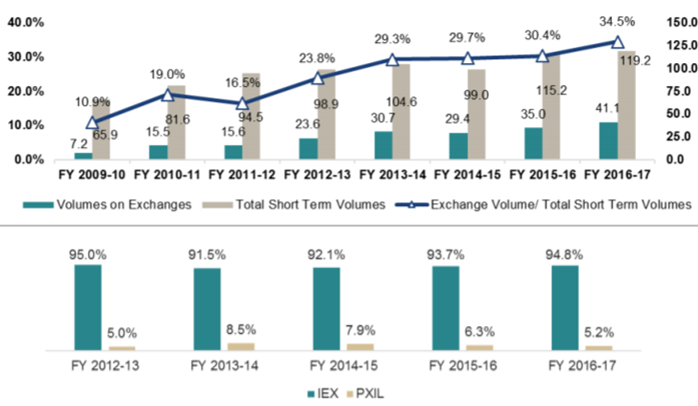 Market share of IEX and PXIL by DAM, TAM and REC

Globally, as high as 50% of total power consumed in many of the western and European countries is traded through exchanges. In India, IEX is the first such exchange which commenced operation in 2008. Just like any other exchange, the seller(s), which are mostly a power producers and buyer(s) (distribution companies like state utilities and others) come on the IEX platform and bid according to their requirements. Once the deal is done, IEX makes its commission or brokerage which is about 2 paisa per unit (both from buy and sell side). This accounts for 87% of revenue for IEX.

In India, around 3.5% of total energy generated in FY 2017 was traded on power exchanges as compared to 30-35% in developed countries and IEX claims to control 98.6% of this market. An exchange operates on the premise of providing a platform in order to drive market efficiency for both buyers and sellers.

Government Initiatives like rural electrification, power for all, UDAY are likely to drive short-term power market volumes, which could result in an expected power exchange share of 21.1% by FY 2022 (from current 3.5% as stated above).

IEX has a highly qualified and experienced management team.

IEX plans to offer its products in neighbouring countries such as Bhutan, Bangladesh and Nepal, all of which are connected at one or more points with the Indian power grid.  Expanding into such new geographic markets would allow the Company to increase its customer base and also enhance the liquidity of electricity products available on its Exchange.

IEX has small number of participants. The Company’s top 10 clients constitute almost 35% of its total revenue from DAM operations.

IEX operational success depends substantially on its ability to maintain and increase the number of participants.