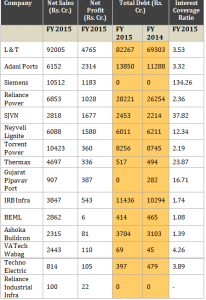 The Indian Government has identified infrastructure as one of the key drivers of economic development in the country. The infra sector continues to suffer with the high concentration of poorly performing assets and lower-than-expected returns. Infrastructure sector Breakup (for the purpose of this article) Larsen & Toubro – Larsen & Toubro Limited (“L&T” or the “Company”) has business interests in sectors ranging from engineering, construction, manufacturing, information technology and financial services. It has a dominant presence in India’s infrastructure, power, hydrocarbon, machinery and railway-related projects. The Company continues to be the best play in the Indian infrastructure space, given its strong business model (diversified with a presence across all segments of infrastructure i.e. power, roads, hydrocarbons & process industries), strong execution capabilities and relatively healthy balance sheet.

IRB Infra – IRB Infrastructure Developers (“IRB” or the “Company”) is one of the leading infrastructure development companies in India in road and highway sector. The Company’s portfolio of 21 BOT projects (14 operational, six in construction phase and one won recently) is among the largest in the country. IRB has recently won a big Rs.10,000 Cr. plus Zozila pass project in Jammu and Kashmir. With this, IRB’s order book stands at Rs.17,320 Cr. – 4.5 times FY 2015 revenue — that provides good earnings visibility.

Ashoka Buildcon – Ashoka Buildcon Ltd. is one of the largest highway developers in the country with an impressive portfolio of over 28 PPP (Public Private Partnership) projects.

The Company has 1,540 MW of operational power generation assets. The projects under development include seven coal-fired projects to be fueled by reserves from captive mines and supplies from India and elsewhere; two gas-fired projects; and twelve hydroelectric projects, six of them in Arunachal Pradesh, five in Himachal Pradesh and one in Uttarakhand.

Reliance Power has won three of the four Ultra Mega Power Projects(UMPPs) awarded by the Indian Government so far. These include UMPPs in Sasan( Madhya Pradesh),Krishnapatnam( Andhra Pradesh) & Tilaiya(Jharkhand).UMPPs are a significant part of the Indian government’s initiative to collaborate with power generation companies to set up 4,000 MW projects to ease the country’s power deficit situation.

Torrent Power – Torrent Power Limited (“Torrent Power” or the “Company”) is engaged in the business of power generation, transmission and distribution of electricity with operations in the states of Gujarat, Maharashtra and Uttar Pradesh. The Company’s power plants are located at SUGEN, Taluka Kamrej, District Surat; Sabarmati, Ahmedabad, and Vatva, Ahmedabad.

Currently, the Company has a generation capacity of 2,102 megawatt and distributes 14 billion units to over 2.76 million customers in the cities of Ahmedabad, Gandhinagar and Surat, besides operating as the distribution franchisee in Bhiwandi in Maharashtra and Agra in Uttar Pradesh. Its subsidiaries include Torrent Power Grid Limited, Torrent Pipavav Generation Limited and Torrent Energy Limited.

Torrent Power is currently implementing a 1200 MW gas based power project at Dahej in South Gujarat, through its subsidiary Torrent Energy Limited. The project is called the DGEN Mega Power Project. It is being implemented in a phased manner starting with a 400 MW first phase. It is also in the process of expanding the capacity of its SUGEN plant near Surat.

Gujarat Pipavav Port – Gujarat Pipavav Port (“Gujarat Pipavav” or the “Company”) is engaged in the construction, operation and maintenance of ports at Pipavav, District Amreli, in the state of Gujarat, India. Gujarat Pipavav has the exclusive right to develop and operate APM Terminals Pipavav and related facilities until September 2028. The Company is promoted by APM Terminals, one of the largest container terminal operators in the world with a global network of 49 terminals in 32 countries and five continents.

VA Tech Wabag – VA Tech Wabag (VA Tech” or the “Company”) is the leader in the water management sector. The Company has a strong order book and has bagged Rs 5,000 Cr. worth of orders in FY 2015.