THE COMPANY CONSIDERS THESE TWO DIVISIONS AS A SINGLE UNIT AND HENCE NO SEGMENTAL BREAKUP IS AVAILABLE.

[2] The Company is operating in losses (on consolidated basis) for the previous 3 financial periods.

* EPS is not annualized.

[3] The Company has its own logistic infrastructure across 12 major cities in India.

Indian E-Commerce industry is pegged at Rs. 81,525 Cr. (U.S. $13.5 billion) as on December 31, 2014, according to The Internet and Mobile Association of India report. The online retail segment which is part of the e-commerce industry accounts for only 1.2% of the total retail market in India and is expected to reach U.S. $44 billion by the end of the year 2020 (U.S. $7 billion in FY 2015).  Factors which are likely to influence online retail’s market share include government policies on e -tailing, logistics, and growth of broadband / high speed data networks.

POSITIVES: Reasons for Rapid Growth in the Industry

[1] Internet Penetration: The growing size of the industry can be attributed to the increased use of smart phones and internet services. Consumer behavior has changed and visiting a local store to buy anything be it clothes, cosmetics, even electronic gadgets is no longer the preferred way of shopping. India’s internet user base is estimated to reach 550 million by 2020; penetration of approximately 40% (from 19% in FY 2015).

[2] Demographic Profile and Infrastructure: According to the most recent census survey in India, the country occupies 17 % of the world’s population. Also, 65% of India’s population is below the age of 35. Indian cities are extremely crowded with poor infrastructure and below average transportation facilities which makes it extremely difficult to reach high street stores. Further, tier 2 and tier 3 cities present a big opportunity for online retailers. This is because those cities lack high-end consumer good and fashion stores despite high purchasing capacity of people living in those cities.

[1] High level of competition: Indian online retail industry is highly competitive. online retailers like Flipkart, Snapdeal, Amazon, Jabong, Paytm and Infibeam are giving tough price competition to each other by offering huge discounts and promotional offer (on the back of private equity investor’s money).

How do E-commerce Companies Make Money? 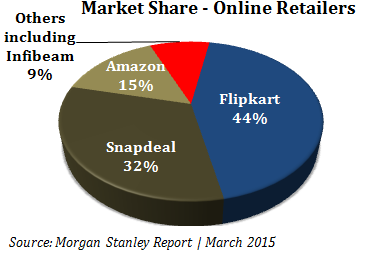 [2] Last-mile delivery: Order fulfillment is one of the biggest challenges and concerns for Indian online retailers. Efficient logistic service is facing big challenge in the country given the geographical complexity, sub-optimal infrastructure, and regulatory environment.

[3] Lack of Differentiation/Innovation:  All online retail companies are offering the very same products with slight price differences.  The focus has remained on developing high end technology rather than creating product differentiation.

[4] High payment cost: In India, unlike in developed markets, Cash on Delivery (CoD) continues to be the preferred route of payment. Around 40-50% of the orders are paid through COD.  This is primarily because; credit/debit card and other modes of online payment are not very popular in India. CoD services impose substantial financial cost since customers often refuse to take delivery of their products. 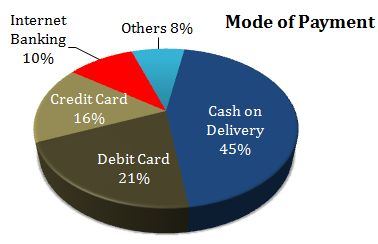 Infibeam – IPO Use of Proceeds

Shares will be issued in accordance with the Issue of Capital and Disclosure Regulations (ICDR) issued by SEBI as applicable to loss making companies – Accordingly, shares would be offered to public investors through a book building process wherein 50% of the net issue would be allotted on a proportionate basis to Qualified Institutional Buyers (QIB). Up to 5% of the QIB portion (excluding the anchor investor portion) will be reserved for domestic mutual funds. Not less than 35% of the net issue (or net issue less allocation to QIBs) would be available to the retail investors.

[1] Financial Performance: Much like other online retail companies in India; Infibeam’s recent financial performance has not been so impressive. Infibeam reported losses consecutively for 3 years.

Financial numbers for FY 2015 are available for 9 months only. However, it is unlikely that the Company will post a profit for the full year since nine months losses stood at Rs. 96.47 Cr.

Value added services offered by BaB account for about 15 % of Infibeam’s revenue, with the rest coming from sale of goods on Company’s online retail platform ‘Infibeam.com’.

[2] Investment in Cloud Data and Purchase of Software – DRHP DISCLOSURES ARE TOO TECHNICAL WITH LITTLE EFFORT MADE TO SIMPLIFY THINGS FOR INVESTORS.

[3] Investment in Logistics Centers: As of March 31, 2015, the Company had 13 logistics centres across 12 cities in India and outsources some of its logistics services. In addition, the Company had six warehouses located at Delhi, Gurgaon, Bengaluru, Ahmedabad, Mumbai and Kolkata. The Company intends to significantly expand its logistics capabilities, including addition of 75 logistics centers to provide better coverage of target markets and ensure timely delivery of products.

[4] Unlike other online retailers, Infibeam is not funded by any private equity investors or venture capitalists rather the company is promoted by a group of individuals based out of Gujarat – Ajit Mehta, Jayshree Mehta, Vishal Mehta and Malav Mehta. The only external equity funding has been from Brand Equity Treaties Ltd (BETL) (subsidiary of Bennett, Coleman & Co Limited) which owns 1.84 % stake in Infibeam.

Top 10 Shareholders as on the date of filing of DRHP

ONLINE RETAIL SECTOR HAS ABSORBED BILLIONS OF DOLLARS IN THE PAST FOUR YEARS FROM PRIVATE EQUITY INVESTORS AND VENTURE CAPITALIST. INFIBEAM IPO WILL CHECK THE GENERAL INVESTORS’ CONFIDENCE IN THE SECTOR.

EXTREMELY NEGATIVE ON THE SECTOR AS A WHOLE AND IN PARTICULAR ON INFIBEAM’S BUSINESS.