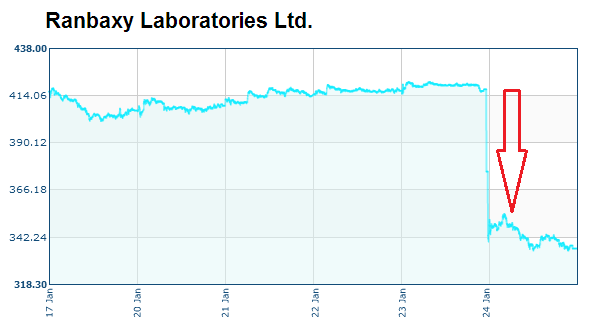 On the 24th of January 2014, as the markets opened for trade, Ranbaxy share price declined 20 % on news of U.S. Food & Drug Administration’s (USFDA) ban on the company from sending its drugs and ingredients  into the United States (*from the company’s production facility in Punjab). It was a sudden and sharp fall and by the time a majority of the market got a chance to react, the share had already lost 1/5th its market capitalization.

Imagine if you knew of this decision before it was announced. You could have short Ranbaxy stock futures and made a huge profit (in this case, you could have doubled your money based on the Ranbaxy’s lot size and margin requirement).

Yes – double your money with the help of a little stock tip. Or, would this be considered insider trading? On paper, the answer is simple but in reality the dividing line between insider trading and stock tips in Indian stock markets in particular is very fine, if one exists at all.

Consider each scenario below and try to think which ones qualify as (illegal) Insider trading:

The problem is not one of answering these questions with a simple yes or no. It is much bigger than that. How do you prove the reason for a trade?

Think of this – Stock tip or not, I am anyways going to sell Ranbaxy shares tomorrow. Now suddenly one director from the company called me and told me about the forthcoming ban. Damn!!

What do I tell him? WHAT ARE YOU DOING, I WAS GOING TO SELL!!! Now that you have told me that I should sell, I can’t sell. I just lost some money here!!

The bottom line– Everyone knows when they are breaking the law. This however remains an area where almost everyone hopes to get a chance to break the law. For a stock tip to be genuine, its origin must be illegal (i.e. it must be born from some inside information somewhere). If that is not the case, then stop calling it a stock tip. By doing so, you may just be diminishing the value of your (or someone else’s) hard work and analysis.

Both, insider trading and stock tips in India (and even overseas) are a reality. Personally, I believe no matter how stringent the law or how heavy the penalty, these practices are never going to change. Stock market operators who work in cahoots with the insiders will keep finding innovative ways to communicate with each other.

An afterthought – There is almost a whole online industry for stock tips in Indian stock markets. I am sure they are doing a fine job. Remember that even if you believe them to be genuine, what you are essentially saying is this –“these guys source genuine insider information; somehow they always get to know. I want to be part of the crime so let me sign up”. On my part, I do not base my buy/ sell decisions on stock tips but on high quality ‘research’. This research could well be conducted both in and out of office. I buy and sell after I am convinced that my trades are clean.

How on earth do you stop this?