Recently I read Ambit’s coffee can portfolio report and MOSL’s annual wealth creation report (the latter I find to be much more insightful and on target). I think composition of the Nifty itself can be a que to long term investing, even though the Nifty changes faster than some of these other reports.

You may look at any long term wealth creation report and one thing that you will find common is – a long list of large cap stocks that have performed consistently. Here’s 7 low risk stocks based on an analysis of these reports. These stocks have beaten fixed deposit returns hands down in any 7 year period (interestingly 5 of these 7 stocks have been in the Nifty since its inception in 1996):

Over the past 10 years (which has been one of the slowest periods for Indian markets) ITC’s stock price has grown an average of 22% (CAGR) every year. The story gets even more interesting if you factor in the dividends. The Rs. 300 stock of ITC has given over Rs. 60 as dividends over the last 10 years; i.e. if you had actually bought this stock 10 years back (i.e. in July 2007), you would have bought it for Rs. 50 and received Rs. 60 by now.

The current price of Rs. 300 for ITC stock, well that’s a bonus!

What sets this company apart is a legal sanction to sell an addictive product. Whenever you have such permission no amount of regulation ever works in curbing sales. From time to time prices are increased but eventually people are happy to pay a little more. This is how cigarette prices have risen over the last 15 years (i.e. Since 2003):

HDFC bank’s deposits have grown at an average CAGR of 30% for the past 10 years. During 2013-2017 period there was an improvement of ~ 3% from 5 year ago period. Why I compare it with the 5 year ago period is because around 2013, everyone was unanimous that the stock had run up a lot and cannot keep growing continuously. In reality, India is still grossly unbanked, particularly rural India.

For this reason I believe banking has the brightest future in India particularly given the advent of technology and governments’ focus on getting everyone in the banking system (and perhaps on discouraging paper currency). Net profit for the bank in the past 10 years has grown exactly in line with deposit growth @ 30% CAGR. Net NPAs have remained at 0.33% which is lowest in the industry. Further, net interest margins for the bank have remained ~ around the current level of 4.4%, thanks to the large base of CASA deposits. With such a position, HDFC bank may move up or down from time to time in line with overall market movement, over a period of time however, it will more likely maintain its price growth trajectory. HDFC Stock price has grown at a CAGR of 25% for the last 10 years.

Infosys purchased for Rs. 490 in July 2007 has returned over Rs. 400 in dividends. The stock currently trades at Rs. 1000 and is going through tough times. For those wondering if they should buy this one, here are some encouraging stats – against a 10 year historical PE of 19.5, the stock is currently available at a trailing PE of 15. While EPS for the company has remained around Rs. 15 per share for the last few quarters, stock price has corrected quite sharply.

Most of the concerns are around tightening regulation for H1 B visas in the USA from where INFY gets over 60% of its revenue. Given that ~ 54% of INFY’s revenue goes into paying salaries, heightened visa costs will surely squeeze margins. That said, in reality so far nothing has changed for H1B Visas. On the contrary recently U.S. resumed fast processing of some H1B visa applications. In many ways INFY is going thru what ITC went thru during 2012-16. The reasons may be very different of course. Skeptics say that INFY is not innovating. To be fair, INFY never really innovated. Innovation always comes from a first generation business and these days you see even an apple is not really innovating. The story for Indian IT has been servicing clients with cost efficiency, it may be based on imitation or something else. In fact, I will be worried if these companies start burning cash in an attempt to innovate and move away from their core brick and mortar ‘cost effective client servicing model’. If at all, the advent of digital should help these companies. India has been the back office for everything digital, it’s only a matter of time when Indian IT starts servicing clients on their major digital transformation.

For an emerging economy like India the above stats are very odd.

Despite the performance of the overall infrastructure index over the past 10 years; L&T’s stock has moved up 112% in the same period (i.e. CAGR OF ~ 8%). L&T has diversified presence across various categories of infrastructure projects, has strong and growing order pipeline and is currently massively undervalued to both the overall market valuations and its own historic multiple. Management expects a growth of 12% in its revenue going forward for this year; this may be below real potential which can be unleashed over the next 5-7 years as India pays more attention to its national infrastructure. 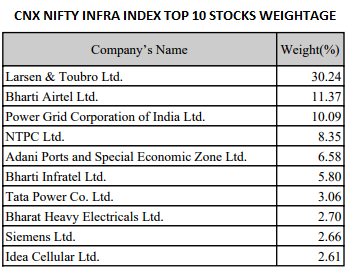 Infrastructure companies benefit the most when the government has capital to award projects. Going by some of the recent developments to augment government resources, it is likely that after years of little spending on infrastructure, government capex activity is set to revive. The biggest beneficiaries of this will be large infrastructure players.

Blame it on Ramdev’s patanjali, FMCG Companies like Colgate and HUL have somewhat struggled over the past 2-3 years. In a snapshot, this is what HUL does: In a middle income economy with a bourgeoning salaried class, this is what will continue to sell. Some of these products have become so iconic that people have started identifying the very product by its brand name. HUL is 67% owned by its foreign promoter and global conglomerate Unilever. The company operates with zero debt. Stock price has risen over 475% in the last 10 years (that’s an average price growth of 19.20% every year, which beats the performance of most fund managers).

In addition the stock paid dividend of Rs. 117.5 during the same period. This is on a stock price of Rs. 202 as it was ten years back. With the current demographics and consumption patterns of India, overall revenue and profitability for FMCG sector is surely going to increase. New entrants in the space have and may continue to put pressure on the margins HUL. Over time however, it is unlikely that a new entrant will be able to replace or dent the market leading position of HUL’s leading products.

In past 10 years stock price is up 1100%. The figure becomes even more astonishing when you consider that this is despite the fact that over the past 2 years, the stock has fallen form Rs. 2100 to its current price of Rs. 1030. During this period the Rs. 85 stock of Lupin as it was 10 years back has paid out Rs. 46 as dividends.

Indian pharmaceutical companies make some of the cheapest drugs and sell it at extremely good margins in developed economies. That’s been the story for many years now. Net revenue from operations for Indian pharmaceutical companies has been growing between 18-24% CAGR over the last 10 years. Over the longer term this is unlikely to change. That said, after the recession of 2008, this story got repeated so much that pharma stocks almost attained the status of being infallible. So much so that if an investor had to necessarily park money overnight, he could have done that in any of the large pharma stocks. Funds, HNIs, retail and FIIs, everyone was pouring money here. In the past 2 years, in addition to a natural cooling down (and coming to reality) of valuations for the sector, a lot of negatives have happened. Primarily, change of regulations both in the U.S. (Lupin’s biggest market) and India with an increased focus on generics has significantly hurt margins for pharma companies. Increased protectionism in recent months particularly in the United States has also had a negative impact.

Finally, between 2012-14, there was a whole new growth area in oncology drugs and almost every large pharma player entered the race. Who knows in the coming years there will be a new category of medication to benefit from and if that happens, it will most certainly benefit most of the large pharma companies in India. Lupin in particular has corrected the most in recent months owing to its high exposure to the U.S. markets. At the same time Lupin has maximum focus on development of generics.

This has been perhaps the least talked about stock in recent times. Ever since Patanjali”s Dant Kanti was launched at a cheaper price point, Colgate’s stock price has suffered. Interestingly neither the margins nor the overall revenue has taken any hit, if at all it has grown. Over the past 10 years, stock is up 448% from Rs. 205; during the same period the company has paid out dividend in excess of Rs. 188.

Colgate has consistently maintained over 50% market share in the toothpaste industry. It is a pure play focusing on oral care segment which has immense potential in India where per capita consumption of toothpaste is among lowest in the world. The market size is constantly growing as people in rural and urban areas alike shift from using traditional forms of oralcare towards toothpaste. Colgate has strong and trusted brand name which gives it its economic moat and pricing power to fend of competition from new comers in the industry.

Past performance may or may not repeat in future.

The best way to play the theme of low risk stocks and long term investment ideas is to buy all 7 of the above stocks and not try to add or reduce anything from the list above. May be ITC or HDFC bank will go through the kind of phase Lupin and Infosys have gone through over the last 2 years. May be Lupin and INFY will become the next HDFC bank in coming years. It is not often about how good or bad an analyst you are. There are many factors at play when it comes to business success. Many of which you have no control over such as government regulation, advent of new products and technologies. Today what seems implausible may be reality by next week. What is certain is that, things are unlikely to change for worst for all 7 companies. If some hurt, some will gain.

Disclaimer: I have strong buy on 3 of the above stocks which are held across all client portfolios including my own. There is no guarantee that price performance will match historic patterns, particularly in the short term.