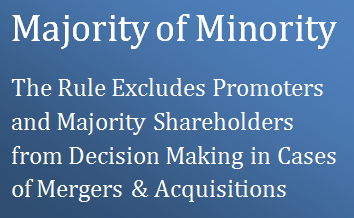 The rule that minority shareholders must approve the merger does not come from the Companies Act. It comes from a SEBI circular of February 2013. Accordingly –

Public shareholders (i.e. shareholders who do not form part of the promoter / promoter group) of both companies must approve the merger by simple majority for it to be approved.

Application of Majority of Minority Rule to Unlisted/ Private Companies

The majority of minority rule is applicable only to public listed companies and does not apply to private / unlisted companies. In case one of the two companies is publicly listed, public shareholders of that company will have to approve the merger by simple majority.

Placing reliance on section 188 of the Companies Act, 2013 which deals with Related Party Transactions is incorrect as far as mergers, acquisitions and other corporate arrangements are concerned.

Section 188 of the Companies Act provides that . . . . . “no related party transaction . . . . . shall be entered into except with the prior approval of the company by a special resolution:

Provided further that no member of the company shall vote on such special resolution, to approve any contract or arrangement which may be entered into by the company, if such member is a related party”.

Compromise, Arrangements and Corporate Amalgamations under the Companies Act (Section 235 and 236 of Companies Act, 2013)

The Companies Act does not lay down anything which gives any meaningful power to minority shareholders with respect to approval of mergers other than the fact that:

“Valuation of shares for the purpose of acquisition of dissenting shareholders shall be done by a ‘registered valuer’. In essence, if an acquirer manages to acquire 90% shareholding of the target company, then the registered valuer will set a price at which the balance 90% shall be acquired.”

Further, any sense which this provision could have made is vitiated by the fact that these ‘registered valuers’ are to be appointed by the audit committee of the company, or in its absence, by the board of directors of the target company.