Manali Petrochemicals Limited (“MPL” or “Company”) is one of the leaders in the production and marketing of Propylene Oxide (“PO”). Propylene oxide is a chemical intermediate used to produce commercial and industrial products and as a building block for the manufacture of a versatile range of derivative chemical products such as Propylene Glycols (PG) and Polyols in India.

PO and its derivatives are used in the manufacture of Polyurethane Foams (PF) which in turn is used in making automobile seats, furniture, garments and mattresses. Accordingly MPL’s products meet the demand of the country’s pharmaceuticals, polyurethane, resin, fragrances, food, refrigeration and oil drilling industries, among others. For a full financial analysis: visit here – Manali Petrochemicals Financial Statements. 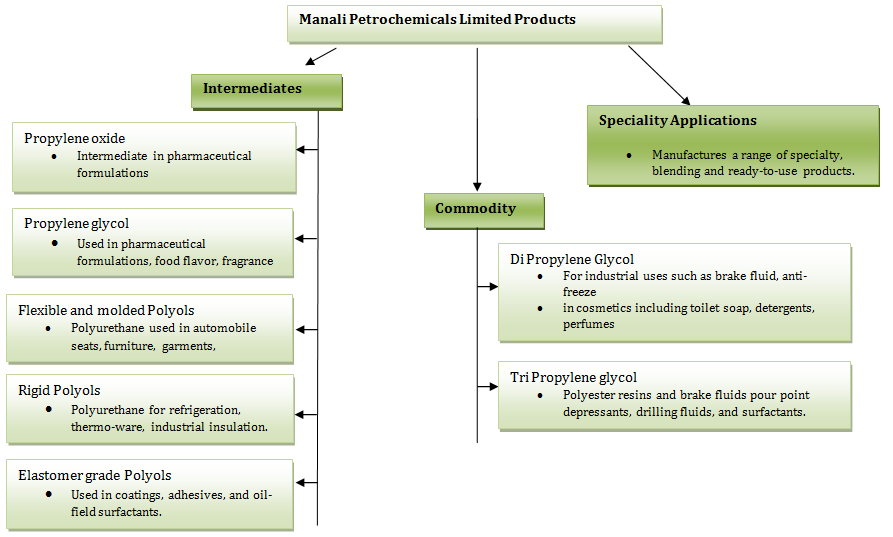 Indian Polyurethane (“PO”) industry’s performance during 2007-2013 has been impressive with double-digit growth. This has been possible partly because of the phenomenal growth in the automobile industry and rising demand for consumer durables.

PU is used in the manufacture of flexible foam, and in Coatings, Adhesives, Sealants & Elastomer (CASE) systems. As a result MPL operates in an ever growing market encompassing a wide variety of goods including furniture, car seating, bedding, paints and coatings, refrigeration, thermo-ware and industrial insulation. The PU market is expected to double within the next 5 years, and hence future outlook of this industry is encouraging and we expect MPL to grow along with the market growth (Source: Company’s Annual report 2013).

The unsaturated polyester industry (one of the intermediate products of MPL) and food / flavor industries are growing in excess of 20 %, and thus there is scope for expanding the Glycol facilities further. The multinational foam suppliers to auto companies are blending their formulations, and this has thrown open the possibilities for the Company to sell the base polyols to them without the need for completing the system with other chemicals / isocyanates thus resulting in increased margins.

On an annual basis MPL produces 29,000 MT of PO, 16,000 MT of PG, 16,000 MT of Polyether Polyol and 5000 MT of System Polyol. During FY 2012-13, MPL comfortably sold all the quantities that it produced, comfortably highlighting the huge scope for further improvement in market share with improved production capacities. MPL is taking steps to install an import terminal at Ennore Port to import PO in bulk to improve its availability and has entered into an agreement for the storage of imported PO in bulk in order to ensure availability of sufficient quantities of Propylene Oxide (PO) for the derivative plants, which is expected to be ready by early 2014.

Manali Petrochemicals has been aiming to increase its market share in all segments especially in the pharmaceutical and industrial application segments, where the value addition is higher. It is also planning to foray into new segments by developing polyols for visco elastic and flexible slab stock memory foam application, and to improve physical properties of molded foam.

Available at cheap valuations owing to a slowdown in consumer spending

Over the last 5 years, Manali Petrochemicals’s sales and net profit have been consistently on the rise. Although, in FY 2013, the Company has witnessed a considerable deceleration in consumer spending which has resulted in a slowdown in demand for MPL’s products. For example, for the month of February 2013 car sales dropped by 26%, the sharpest monthly decline in over 12 years.

Commercial vehicle sales, fell 35% during the month. Similarly, industrial production has been weak for most part of FY 2013 and consumer spending on household items has reduced.

In addition to the slowdown in industrial production and consumer spending as discussed above, India has been suffering from a high rate of inflation for the past many months with the general level of prices for commodities and raw materials rising at an alarming rate.

For FY 2013, Manali Petrochemicals’s raw material expenses went up by 1.53 %, in comparison, net income from sale of products decreased by only 2.86 %.

High inflation has also kept R.B.I. from cutting key interest rates which directly affect the travel industry. In addition, fuel price inflation has resulted in air travel getting dearer by up to 30-40 % due to which domestic travelers in particular have cut back on their travel spends.  While we believe that we are nearing the end of a bad economic cycle any meaningful improvement in the economy will primarily depend upon rising consumer spending and the coming down of the high rate of inflation prevailing in the country.

Risks relating to availability of PO

** The stock analysis of Manali Petrochemicals including the financial analysis report linked above, is for information purpose only.  This analysis should not be taken as a buy/sell recommendation. The circumstances of the company and the economic environment may have changed since the date of this stock analysis.