National Aluminium Company Limited (“NALCO” or the “Company“) is engaged in the production and sale of alumina and aluminum products primarily in India. NACL is primarily involved in bauxite mining, alumina refining, aluminum smelting and casting, and power generation activities. 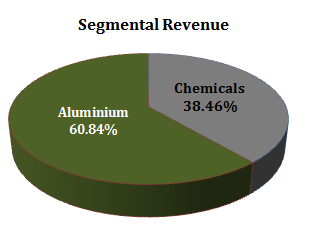 What’s Going for the Stock

NALCO has been able to report a profit of Rs. 642.35 despite heavy losses in its aluminium segment. This has been possible mainly because of an increase in the sales volume of alumna which has higher margins. The Company’s aluminium business which makes over 60 % contribution to the total revenue has been making losses for the past 2 years. This is mainly on account of a steep drop in global aluminium prices to $1,800 from over $2,600.

Given the weak prices, the Company has reduced aluminium output and is focusing on exporting the raw material, alumina, in order to earn higher profit margins. With the addition of a 5th stream in Damanjodi (Orissa), the Company is poised to become a major global alumina producer.

The Company is planning to strengthen its position in wind power, strategic metals and alloys. In its future strategic growth plans, the Company is to concentrate more on its core competence areas with further expansion of the capacities in mines, refinery, smelter and captive power plant with certain backward and forward integration.

Company’s diversification to other sources of power, specifically in wind energy gives it a new source of revenue. The Company is also planning to foray into strategic metals for which it has signed a MOU with Indian Rare Earths Limited (IREL) for development of a titanium slag project at Chhatrapur, Odisha.

Future Prospects: Future growth of the Company is likely to come from transport, building and construction sectors which are the primary consumers of aluminium. Additionally, with Government’s emphasis on infrastructure development and the power sector is likely to grow which in turn will reduce the cost component for NALCO thereby increasing its profit margins.

Non-Availability of Coal for Power Plants 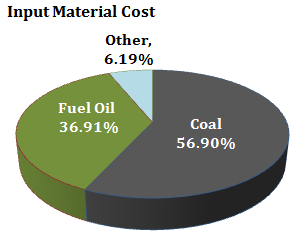 Rise in the input cost of materials is a major threat for aluminium producers like NALCO. Power is one of the major inputs for aluminium production, constituting roughly 40% of the production cost. Substantial increase in the cost of coal in recent past has put additional cost pressure on the Company. The Company faces a major challenge of procuring required quantity of coal at reasonable price. The recent de-allocation of captive coal blocks allocated earlier to aluminium players like NALCO, HINDALCO and Sesa Sterlite has further increases operational challenges for these companies.

Alumina export price is directly related to LME metal price and is normally driven by international demand-supply scenario for alumina. The LME aluminium prices have been highly volatile throughout the year fluctuating between a high of U.S. $2,123 in Feb’13 to a low of U.S. $1,695 in Dec’14 (which was the lowest LME level since 2009). The LME cash settlement price average was U.S. $1,846 for the year 2014.

While the price export sale transactions are hedged, if the Indian currency appreciates, the demand for NALCO’s aluminum and alumina will go down as it will become cheaper for counterparties to procure the same from other competing countries like China.

The Government of India owns 80.93 % of the Company as on 31st December 2014. SEBI has mandated every company to bring their promoter holdings below 75% before FY 2016. As part of government’s disinvestment program, the government plans to sell its 10% holding to comply with SEBI’s promoter holding requirements. NALCO must disinvest this stake before FY 2016. Given that the share sale is time bound, the company may have to divest at below par valuations and may not get the benefit of timing the market or waiting for rich valuations.

** The stock analysis of NALCO including the financial analysis report  above, is for information purpose only.  This analysis should not be taken as a buy/sell recommendation. The circumstances of the company and the economic environment may have changed since the date of this stock analysis. For an updated list of the best large cap stocks, visit here – Blue chip Stocks.