IT Park – cater to companies engaged in software, BPO, call centers and other IT and ITes activities.

Indabrator, the Industrial Capital Goods Division is the leading provider of equipments such as forging hammers and presses, blowroom lines, and sucker rod pumps used in oil recovery. The Company has strong client base both from public sector (including BHEL, SAIL, NALCO, Indian Railways, HAL) and from private sector (including TATA, Jindal, L & T, Bajaj and Mahindra).

In FY 2014, Nesco ventured into hospitality services which includes food courts with leading international and national food brands to cater to the growing demand of quality food services from Nesco IT Park and from their exhibition centre. 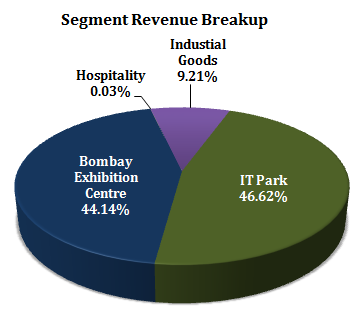 The Company operates with ZERO DEBT.

The Bombay Convention & Exhibition Centre is the second largest exhibition centre (~0.45 million sq. ft.) in India. BCEC close proximity to railway station, airports, hotels, large exhibition space, and other offerings including centralized air-conditioned space, wi-fi services and well-designed ventilation making this one of the most popular exhibition destination in the country.

Since its establishment (in 1992), the centre has hosted more than 2000 national and international trade fairs, exhibitions and events. In FY 2015, 130 exhibitions were held in the centre. In the same year, the centre added 37 new organizers/clients. 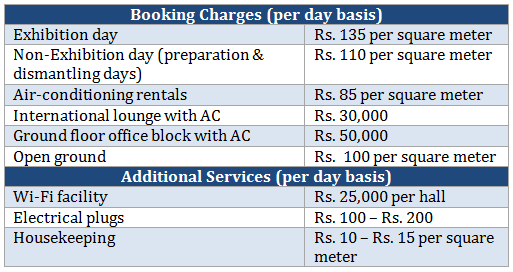 A major chunk of exhibition fees is received in advance (with cancellation fees of up to 25 %), indicating that the exhibition business has negative working capital cycle due to minimum inventory holding. The Company is planning to deploy cash flow generated from this business towards the construction of a new IT park project (see below: Assured and Stable Revenue Stream) indicating no need for debt for this new project.

Nesco has 2 revenue streams –lease/license revenue (from IT parks and exhibition centre) and sale of industrial products. In FY 2015, lease revenue and industrial products sales revenue accounted for 90.76 % and 9.21 % respectively. Further, the Company has started construction of a 4th IT building with a built up area of approx 1.72 million sq. ft. Upon completion, contribution of lease revenue from buildings will further increase.

With contribution of lease revenues to total revenue increasing, this eliminates any business risk originating from a slowdown in the industrial products business.

The Company originally started its operations as a capital goods company but now major chunk of its revenue comes from its other businesses. For the last 2 financial years (i.e. FY 2014 and FY 2015), industrial products division has incurred a loss of Rs. 64.32 Cr. and Rs. 39.02 Cr. respectively. Due to the slowdown in capital goods industry, a large number of projects were either cancelled or deferred due to demand slowdown in steel, automobile and other industries.

Also, the Company faces pressure on prices due to increasing competition from domestic and foreign players.

For FY 2015, the Company paid 65 % dividend (Rs. 6.50 per share). At current price Rs. 1,642.10 (18 November 2015), the Company has a dividend yield of 0.40 %. The dividend payout ratio has been low primarily because the management chose to reinvest free cash flow in construction of new IT buildings. The management intends to maintain the same as they are not in favor of taking debt and will use internal accrual to fund further construction over the next four to five years.

In an economic slowdown, the Company’s exhibition business is likely to suffer. The revenue from this business is dependent on growth in the economy. Trade promotion activities are discretionary and depend upon large corporate clients who get affected most negatively in subdued macroeconomic environment.

Further, the slowdown will also have a negative effect on the occupancy rate in the IT buildings which could further impact revenue stream and profitability margins.