Net neutrality is the principle that Internet service providers and governments should treat all data on the Internet the same, not discriminating or charging differentially by user, content, site, platform, application, type of attached equipment, or mode of communication.

Why Telecom Companies Started Discriminating?
Imagine a situation where a big corporate client is allowed to pay for faster downloads from its site or for faster speed on its pages. This will create an incentive for the Internet Service Providers (ISPs) to allocate more bandwidth to such a client, may (or may not be) at the expense of slowing things down for other sites. Think about (i) Direct-to-Home cinema over the internet, or movie download sites that charge customers for live streaming; (ii) Flipkart, Amazon and other big e-tailers whose business would really have an edge over others (including each other) if customers were able to browse their sites faster. 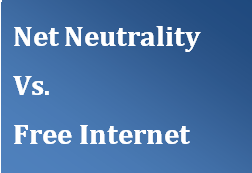 In the most basic form internet neutrality is hampered when certain big clients are given preference over smaller players, thereby killing competition. Imagine further a situation where a website discriminated how a certain ISP operates. That may motivate that particular ISP to discriminate against such a website.

There could be many ways in which ISPs could discriminate over the internet which is why it is extremely difficult to have any sort of comprehensive regulation in this area. Just to name a few discriminatory tactics –

Bandwidth throttling which influences users into buying costlier internet plans where speed is not manipulated so that they can open pages faster.

Other discriminatory practices include traffic shaping, over-provisioning and IP address or port blocking. The big idea to keep in mind is that discrimination could result in one or both of the two – (i) it may slow down certain sites, platforms or users in order to drive traffic to certain other sites for a monetary gain; or such discrimination may (ii) allocate ISPs resources in such a way that all content over the internet is not treated equally.

Instead of regulating the internet in so far as net neutrality issues are concerned, I believe that the government will benefit far more by giving out free internet to the whole country especially in today’s technology backed start-up ecosystem. As I mentioned on twitter yesterday, I know a gardener who cross-breeds beautiful new plant varieties.

Imagine if people like him can start websites and start selling across the world, how much more tax could the Government of India collect? Imagine how many jobs can a billion plus minds create by putting their ideas out to the world. All they need is a smart-phone and free internet. Why charge for this? Internet should be basic right in today’s technology oriented world.

The Impact of Providing Free Internet

Besides who will pick the tab (i.e. pay for) free internet, major opposition circles around reasons such as:

[1] Telecom Sector Will Suffer – In my opinion this is hardly a reason to suppress creativity. In any event, will it not be the same service providers who will be incentivised for providing free internet?

For a detailed discussion on this, see my post on ‘telecom stocks heading for a crash including the comments section

[2] Regulation will get difficult in the absence of service providers – I am sure that there are a million ways to keep regulation in place while making internet services free. Note here that the regulation is not only about view-able content but equally about protecting from spam and cookie attacks.

In the ultimate analysis, I am so strongly in favor of free internet that I have no hesitation in saying that the countries which will succeed the most going forward will be ones which are able to provide internet to its people as a basic right.

I am always happy to hear from anyone who supports the movement for a free internet, around the world! You can leave comments below.