Why The Next PNB Fraud Will Happen Back in 2010, I completed my final IPO transaction as a lawyer. My job was to prepare due diligence reports on companies that were going to list on a stock exchange. To put it mildly, due diligence is one of the most boring and pointless things you can do with a human life. Pointless because nothing really falls on it when the company you are doing diligence on is your paymaster (along with everyone else working on the transaction), boring because……. just try it someday, really…..

The bank which was going to list and for which we were doing diligence was a nationalised bank and had been in operation for many decades.

The glitch we found on their books was this – Their Authorised Share Capital was less than their Issued Capital. Yes….., the bank had issued more shares than they were authorised to issue by their shareholders, which in this case was the Government of India.

We informed the bank and this is what the management told us in a few hours:

Mgmt: Where are you getting the concept of Authorised and Issued Capital?

Mgmt: The Companies Act does not apply to us because we were set up by the Bank Nationalization of 1969.

Technically, the management was right even though it did not make any sense. The concept of Authorised and Issued Capital does after all come from the Companies Act which did not apply to them. All I did was smile and ask them to please correct this error which had possibly gone on for decades if not years.

I started this firm in 2012. The first time I made any respectable amount of money was in 2013 and later on a similar trade in 2015. I often wonder why I did not repeat this. It was by going short on IDBI and SBI. Since I was far more vocal back then, I had put out a mail and an article on ‘why I was doing what I was doing’. Somehow I can not locate that article (if any old reader happens to have it, please do share). With some digging up, we found a later reiteration of that article (from 2014) here – Undervalued Bank Stocks in India (Asset Quality Concerns – Originally published in 2013).

Naturally, collapse of public sector banking has been the biggest blessing in my journey so far and I can not thank god enough for everything this has done for me. I hope things change but this is unlikely. Fast forward five years and nothing at all has changed for these banks.The only exception being that NPA’s appeared a small problem back then……….it will get bigger going forward. That said, I still maintain that NPAs are not the problem at all. In case you own any PSU Bank stocks or otherwise, here’s my view on this: 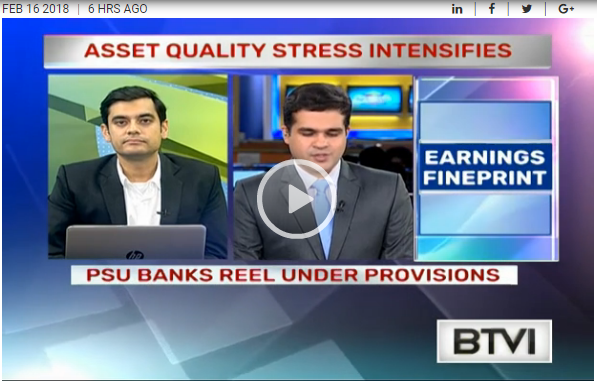