NTPC Limited (“NTPC” or the “Company”) is the largest power generating company in India. Set up in 1975, NTPC is engaged in the generation, distribution, and sale of power to state power utilities in India. NTPC operates with a current power generation capacity of 42,454 MW, with 17 coal based and 7 gas based stations, located across the country. NTPC has diversified into hydro power, coal mining, power equipment manufacturing, oil & gas exploration, power trading & distribution. The Company plans to become a 128,000 MW power generation company by 2032, with a well diversified fuel mix comprising – 56% coal, 16% gas, 11% nuclear energy, 9% renewable energy and 8% hydro power based capacity.

This Stock Analysis report presents a long term outlook and the future prospects of NTPC Limited. 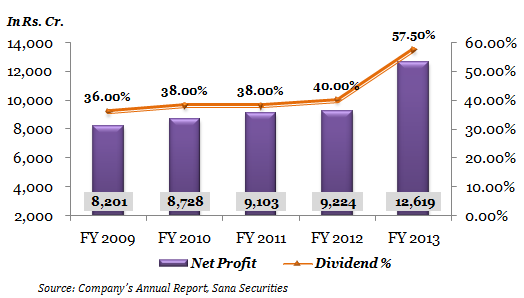 Some of the factors which indicate continuous and robust growth outlook for NTPC Limited  include:

Rising demand pattern: the demand for power in India is expected to grow in coming years on the back of growing population and, rising standards of living, increasing urbanization and industrial growth.

India’s large power capacity requirement translates into an overall estimated capacity of 778 GW for 8% GDP growth and 960 GW for 9% growth by 2032*.

NTPC Limited has maintained its leadership position in the Indian power sector in terms of size and efficiency, with approximately 18.44% of total capacity of the country. The Company contributes to around 27% of the total power generation in the country. The Company has been among the lowest cost producers of power in India at its overall tariff of Rs. 2.96 per unit and provides power to 32 out of the 35 States and Union Territories. This gives NTPC, the status of a national power Company with a geographically diversified customer base.

The Company is able to sustain its leadership through rapid capacity addition, high efficiency and competitive cost of power. The installed capacity of NTPC at present is 42,454 MW and it plans to add another 14,000 MW to its total capacity by the end of FY 2016-17. This is likely to result in strong revenue visibility for NTPC over the next three years. NTPC is targeting to become a 1,28,000 MW power company by FY 2032.

Coal is an important raw material for NTPC as currently 90% of its power generation capacity is coal based and in future also, a considerable portion of generation capacity is going to be coal-based. NTPC sources its coal mainly from Coal India Limited (CIL) and natural gas from GAIL (India) Limited. The Company is expected to benefit from the government directive to CIL to sign fuel supply agreements with power producers. NTPC is also backward integrated through captive coal mining and gas exploration business; it aims to meet approx. 20% of its coal needs from captive mines by 2017.

Power Sector is a highly capital-intensive industry with long gestation periods. Revenue generation could take many years after the initial conceptualisation of a project. Since most of the projects have a long gestation period (4-5 years of construction period and operating period of over 25 years), the uncertainties and risks involved are high.

Delay in commissioning of projects is also a concern as it leads to delay in inflow of revenues. At the same time, power companies have to incur costs on the delayed projects, thus affecting margins and overall profitability. If any project or capacity addition plans of NTPC get delayed or do not materialise at all, it could have a negative impact on the share price.

Due to the gap between the demand and supply in the Indian power sector, the Government of India has taken several policy measures for private investors to participate in the power sector. The share of private sector capacity has increased to approx. 69 GW which is around 31% of the total installed capacity of the country as on March 31, 2013. However, private sector has contributed -20% of total electricity generation in the FY 2013. With the entry of private players in power sector, the competition is expected to intensify.

Constrained availability of fuel for power sector continues to be one of the key concerns affecting the power generation in India which is predominantly based on fossil fuel i.e. coal and gas. The production of coal as well as gas has not kept pace with the demand. This fuel supply constraints affect the capacity addition plan undertaken by the power generation companies which in turn impacts the revenue stream and put pressure on the margins. Any further reduction in the availability of fuel is likely to have a negative impact on the trading price of NTPC’s stock.

** The stock analysis of NTPC Limited including the financial analysis report linked above, is for informational purpose only.  This analysis should not be taken as a buy/sell recommendation. The circumstances of the company and the economic environment may have changed since the date of this stock analysis.