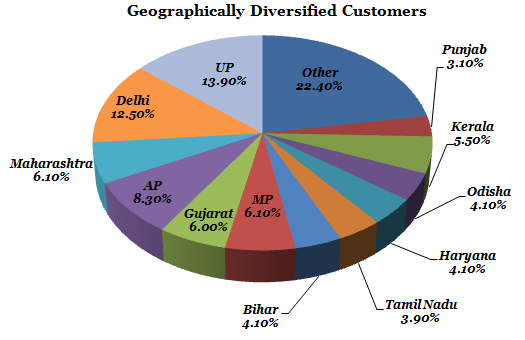 NTPC Limited (“NTPC” or the “Company”) is a thermal generation company and is at present India’s largest power generating entity.

On 5th April 2021, the Company announced that with successful completion of trial operation by Unit-2 of 660 MW capacity of Tanda Super Thermal Power Station in Uttar Pradesh (U.P) Stage-II (2 x 660 MW), the NTPC installed capacity has risen to 65,810 MW

Alongside continuing its core business of coal and gas-based thermal generation, NTPC recently diversified (in some cases through JVs) into related activities like consulting, hydropower development, power trading, coal mining, and renewable projects (wind and solar).

NTPC Group has 70 Power stations including 26 Renewable projects. The group has over 18 GW of capacity under construction, including 5 GW of renewable energy projects.

NTPC has set aggressive renewables long term capacity addition target of 60 GW by 2032, which was earlier pegged at 30 GW.

At the end of FY 2021, the Company has a renewable energy capacity of around 1,365 MW and the capacity under construction is 3019 MW. All of these have PPAs except 125 MW.

The Company plans to its arm NTPC Renewable Energy Ltd in 2022-23, to raise funds for achieving its ambitious target of 60 GW installed renewable energy capacity by 2032, which entails a total investment of Rs 2.5 lakh Cr.

On July 13th 2021, NTPC Renewable Energy ltd, a 100% subsidiary of NTPC, has received the go-ahead from Ministry of New and Renewable Energy (MNRE) to set up 4750 MW renewable energy park at Rann of Kutch in Khavada, Gujarat. This will be India’s largest solar park to be built by the largest power producer of the country.

NTPC Limited has maintained its leadership position in the Indian power sector in terms of size and efficiency, with approximately 16.78% of total capacity of the country. The Company contributes to around 20.96% of the total power generation in the country. The Company has been among the lowest cost producers of power in India at its overall tariff of Rs. 2.96 per unit and provides power to 32 out of the 35 States and Union Territories. This gives NTPC, the status of a national power Company with a geographically diversified customer base.

The Company is able to sustain its leadership through rapid capacity addition, high efficiency and competitive cost of power. The installed capacity of NTPC at present is 65810 MW. NTPC is targeting to become a 160 GW power company by FY 2032.  NTPC has increased its renewable capacity target to 60 GW by 2032 (v/s 32GW by 2032 earlier). The Company targets 15GW of commissioned renewable capacity by FY24. It could also look at plans for potential spin-offs / the monetization of its RE subsidiary.

Operating profits are stable as they are insulated from volume and price risk by favourable regulations. The Company has long-term power purchase agreements (PPA) for its plants, which allow changes in fuel costs to be passed through. There is a proven record of timely regulatory tariff reviews, which ensures reasonable cost recovery.

Coal is an important raw material for NTPC as currently 90% of its power generation capacity is coal based and in future also, a considerable portion of generation capacity is going to be coal-based. NTPC sources its coal mainly from Coal India Limited (CIL) and natural gas from GAIL (India) Limited. The Company is expected to benefit from the government directive to CIL to sign fuel supply agreements with power producers. 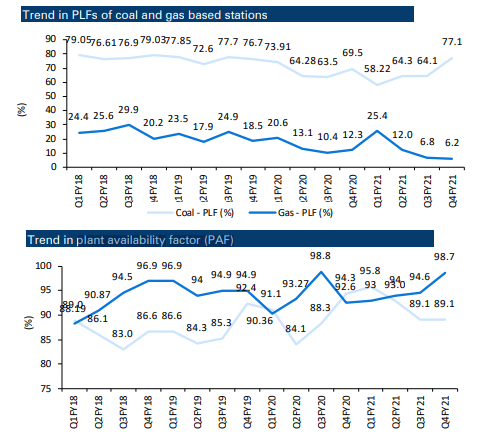