ONGC commands a huge share of ~70% of the domestic crude production. ONGC’s robust infrastructure and strong capabilities in the field of exploration, production, transportation and processing have enabled it to become a leader in the oil and gas space in the country. 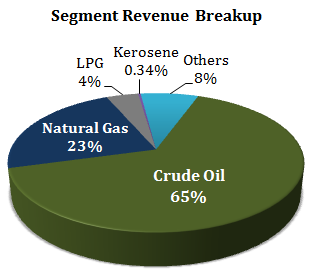 ONGC has shown consistent growth over the last ten years (i.e. 2005-06 to 2014-15). It’s operating profit (EBITDA) over this period grew at an impressive CAGR of 10.04 %. Company’s reserves are in excess of Rs. 1,76,177 Cr (FY 2015), and it operates with negligible debt (0.29- debt to equity) on its books. ONGC has consistently been among the top dividend paying companies. The Company has been consistently paying dividends for more than 10 years.

Over the last 10 years ONGC has maintained an average Dividend Yield of 4.80%. The below table lists price and dividend yield for the past 10 years:

ONGC has planned an expansion program to be completed by 2030. According to ONGC’s Perspective Plan 2030, the Company aims to unlock more than 450 million tonnes of oil and oil equivalents. The Company is targeting production of more than 130 MT in 2030, of which half will come from assets owned by its overseas subsidiary ONGC Videsh Ltd (OVL).

As of December 2015, the Company has made 14 oil and gas discoveries in domestic fields (operated by ONGC). These new finds will help ONGC to increase its domestic crude oil production.

Rising middle class and increasing urbanization in emerging economies like India will continue to drive energy demand of the kind that offer immense opportunities for oil and gas sector companies. According to the Oil Ministry, Government of India estimates, India’s energy demand is expected to more than double by 2035, from less than 700 million tonnes of oil equivalent (MT) today, to around 1,500 MT.

India is world’s fourth largest energy consuming nation, which imports as much as 80 % of its crude oil and 25 % of its natural gas requirements. While ONGC has already registered its presence in emerging growth areas, we believe that improvement in ONGC’s production is crucial for India’s energy security.

Due to sharp decline in crude prices and the government’s decision to deregulate diesel prices, under recoveries have reduced. This has proved to be very positive for upstream producers like ONGC as it reduces the fuel subsidy burden share of the government.

The upstream company’s profits have fallen due to consistent fall in global crude oil prices. Falling oil prices have reduced ONGC’s net profit by 64% in Q3 FY 2016. The Company’s cost of producing one barrel of crude oil is ~ US $36 and after including taxes and levies, the cost comes to US $51.52 per barrel. 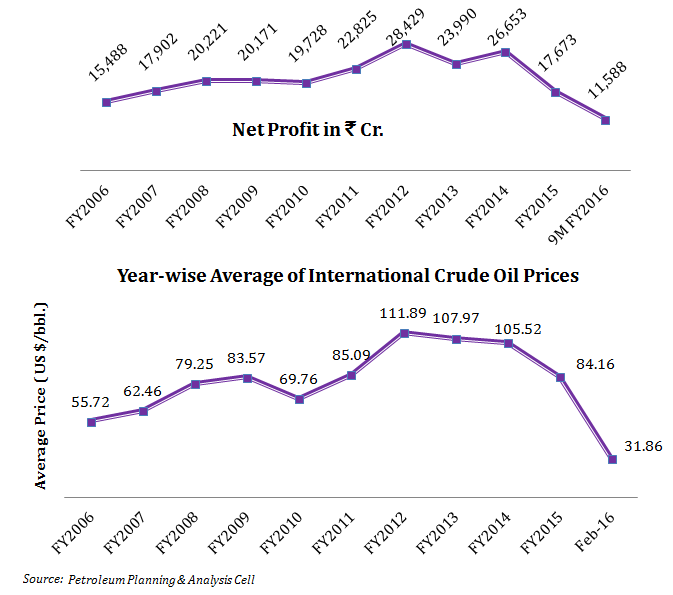 Unless crude oil prices revive soon, financial performance, results of operations and consequently the share price of ONGC will remain under pressure.

Increasing Use of Electric Vehicles

The use of electric vehicles around the world is rising. Given the environmental concerns around the use of petrol/ diesel as fuel for vehicles; it is only fair to expect the use of vehicles using alternate fuels to keep rising. This remains an omnipresent threat for oil and automobile industry around the world.

ONGC’s business will be affected by the changing regulatory policies such as production restrictions, changes in prices, taxes and other amounts payable to various governments or their agencies. Any adverse developments will have a negative impact on the overall profitability of the Company.

For example – In October 2015, the government reduced price of natural gas by 18% to $3.82 per unit. This move will further lower their revenues and cash flows, which are already declining from low oil prices. Natural Gas contributes 23 % to the total revenue for ONGC.

Risks Related to Execution of Projects

ONGC’s expansion projects have long execution timelines with interdependencies. To successfully execute a project, the Company has to rely on multiple equipment and services providers and construction contractors across sites spread over a wide geographic area. Ensuring timely delivery of such services and equipment at the right cost, managing materials at remote sites, while simultaneously ensuring that all compliances are met can pose potential challenges.

Any delay in the commissioning of projects is a concern for the Company as it leads to delay in inflow of revenues. At the same time, company has to incur costs on the delayed projects, thus affecting margins and overall profitability which could have a negative impact on the share price.