Over the last 5 trading sessions, stocks of public sector banks have surged anywhere between 5-25% in trade. They have caught the attention of investors and traders alike. Besides old timers who invested in PSU bank stocks for high dividend yields, there are many others who now believe that these banks could turn things around under the new government.

What Caused The Surge in Stock Prices?

It is true that some of these banks have reported better financial numbers than their peers for Q1 of FY 2016, but the difference on this count is far to small to justify such sharp up-move. In any event, the surge is across the board; even for banks which deteriorated in asset quality!

The real reason for this surge is the government’s decision to pump in Rs. 70,000 Cr in the form of additional capital over the next 4 years. Out of this, Rs. 25,000 Cr will be provided to these banks this year itself.

Why The Need for Government Infusion of Capital in PSU Banks?

It’s all about ratios.

As per the Basel norms, a bank must maintain certain minimum capital adequacy ratios to run its operations. Like its previous versions, Basel III norms are meant to make banking practices standardize around the world so as to promote transparency, improve risk management and to give banks the ability to absorb financial shake ups.

Currently as per the Basel II norms, a bank must maintain minimum Tier 1 capital of 6% and overall capital adequacy ratio at 9%. Under the Basel III norms, which come in force from Financial Year 2019, while the overall capital adequacy ratio remains the same at 9%; minimum Common Equity Tier 1 Capital should be maintained at 5.5% and the overall Tier 1 Capital should be maintained at 7%. In addition a Capital Conservation Buffer (CCB) of 2.5% must be maintained.

Indian state run banks are only just capitalized to meet the Basel III requirements. In fact, in case of many of these banks, they are at a point where unless more capital is infused by the government, they will not be able to grow their business and compete with their private sector peers.

[Also see below: How Basel Norms Restrict a Bank’s Ability to Grow?]

How is Tier 1 and Tier 2 Capital Calculated for Indian Banks?

How Basel Norms Restrict a Bank’s Ability to Grow?

While the Basel norms safeguard against default risks by making sure that the banks have enough buffer to withstand credit default risks, they do restrict the ability of banks to grow unless the banks can put adequate capital as required by these norms.

Effectively, if a bank fails to put together sufficient Tier 1 and Tier 2 capital, it will not be able to accept more deposits from investors which will naturally restrict its growth.

Should you buy PSU Bank Stocks at Current Prices?

The recent run up in PSU Bank Stocks is clearly a knee jerk reaction to the capital infusion / Re-capitalization announcement made by the government. Momentum traders and all those who rely on latency jumped in from all directions to buy into these stocks. No one can be sure if these stocks will rise a few percentage points more from here or if they will fall back again. Given that they were so beaten down, traders and behavior scientists will probably still like to buy hoping for more good news from the government.

For investors however, the 2 big questions are:

[1] What is the likelihood that PSU bank stocks will regain their past glory?

[2] Will they start paying the kind of high dividend yields they used to pay? In which case it would be most attractive to buy these stocks at current prices and aim for a 10%+ kind of tax free dividend yield in future.

While some PSU Banks may be able to turn things around, not all will do well. In fact, it is most likely that most of the PSU banks will continue to destroy wealth unless their is serious accountability of management, reduced political interference and performance based incentives.

I have maintained a bearish view on this space since the year 2010.

I was involved as an attorney on the last 2 PSU bank deals which got additional capital via their IPOs – United bank Of India and Punjab and Sind Bank. Since their listing 5 years ago, these banks are down by over 60%. Clearly, capital infusion did not help that much. Also keep in mind that at the time when these banks were listed, the investment bankers working on the deal claimed that they left a lot of value on the table and were issuing shares at substantial discount. 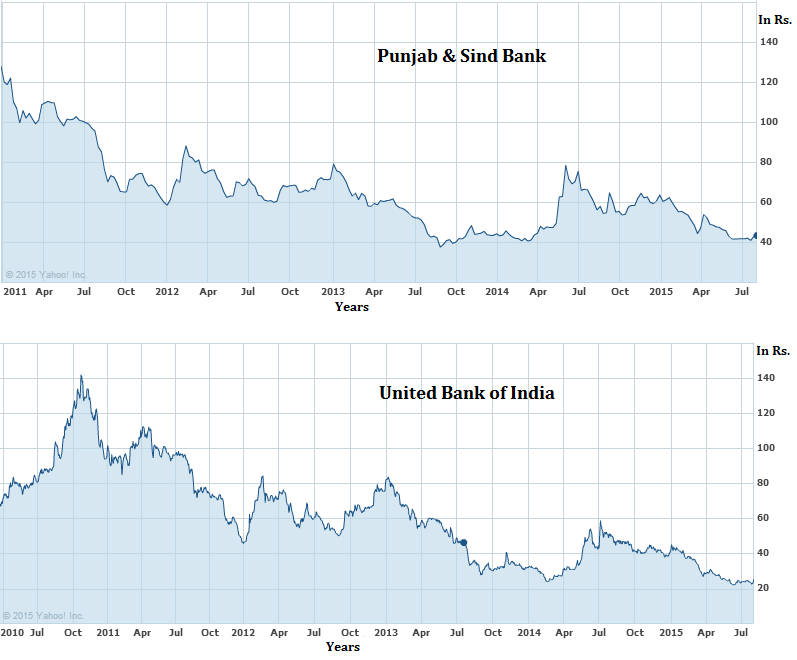 If PSU banks have to compete with their private sector peers they need to seriously improve service standards and set higher levels of accountability particularly in terms of loan disbursements.

Political Interference: The Problem with Being Government Owned

As per the Guinness Book of World Records – 11.5 Crore Jan Dhan Bank accounts were opened with PSU Banks in the first 5 months of the scheme being announced. As an investor, do not expect these banks to be streamlined in future. While these accounts made direct subsidy transfers possible for millions, such efforts come at a price to shareholders.

In fact, many years back what turned me against PSU banks was similar farm loan waiver schemes and the inability of the government to compensate or capitalize these banks adequately in return. In such environment, where is the question of these banks competing against their private sector peers?

A related point to the two points above is that given the abysmal track record of capital utilization and the current valuations of PSU Banks, it is highly unlikely that they will be able to raise money via an FPO, Rights issue or by accessing primary markets in any other way.

This could only mean one thing – the government is likely to get a greater hold in the functioning of these banks.

While the government is talking about performance as a basis of infusing additional capital, it has not yet come out with specific criteria for performance. In the first tranche, the plan is to capitalize banks based on need. Then start incentivizing (with additional capital) those banks which start showing a decrease in NPAs, improvement in Net Interest Margins (NIMs) and better performance on other similar metrics. There are however 2 problems with this:

First, this could spell doomsday for a lot of public listed PSU Banks which do not perform as per the government criteria. Given that all PSU banks have substantial retail shareholder investments, would it not be better to merge them with bigger banks rather than not incentivizing them for failing to perform? The capital adequacy chart above, to my mind, makes it pretty clear as to which of these banks are almost certain to collapse.

Second, About incentive criteria – given that a major expenditure for these banks is in the form of employee remuneration, should the salary structure not be different for different banks, based on performance? Same for promotions, retirement and all other hiring and firing criteria.

Unless the government thinks about these issues, it is unlikely that PSU bank stocks will  attract genuine investor interest. News flows may however keep traders busy.