I am bullish on stocks in the internet space.

Currently, antivirus market in India is valued at Rs. 5,000 Cr. The market is expected to grow at a CAGR of 12 % to reach Rs. 6,600 Cr. by 2017 [Source: Quick Heal IPO document] due to a rise in malware and virus threats. The increased use of mobile devices and the Internet have increased the frequency and complexity of these threats. 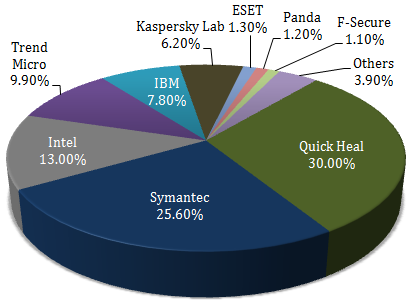 Quick Heal IPO – Use of Proceeds 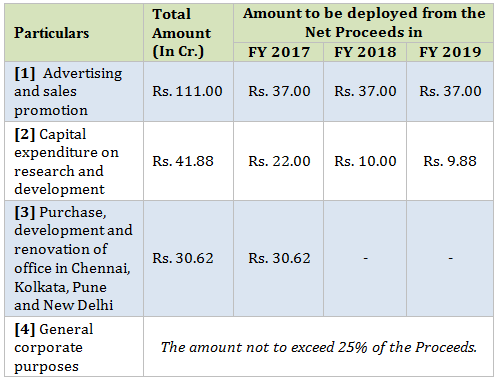 Increasing IT Penetration in India

It is expected that the total number of internet connections will reach 500 million by FY 2018 (according to FICCI – KPMG | India Media and Entertainment Industry Report 2014). With the rise in the internet traffic and frequent use of internet enabled systems (laptops, desktops, tablets) and mobile devices, there is huge need for IT security.

As smartphones and personal laptops/desktops are repositories of personal data and information, the associated loss or theft of these devices and the increase in mobile malware attacks provides huge growth opportunity to antivirus market in India. 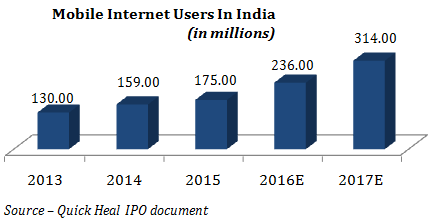 65% of India’s Internet traffic as of May 2015 was driven by mobile devices (Source – Quick Heal IPO document).

Users accessing the Internet through their mobile devices have become key driver for increase in overall Internet subscriber base in the country. The number of mobile Internet users in India is expected to rise to 314 million by 2017 as compared to 175 million in 2014 (Source – Quick Heal IPO document).

According to Ericson Mobility Report, the number of smartphone subscriptions is expected to reach over 750 million by 2020, up from 140 million in 2014.

As of June 30, 2015, the Company had more than 1.1 million active licenses under mobile solutions. With more and more smartphone subscription and greater internet penetration, number of active licenses is likely to go up.

India has a large personal computer installed base of 55-60 million, growing at a rate of over 9% and is expected to reach around 70 million by 2017. 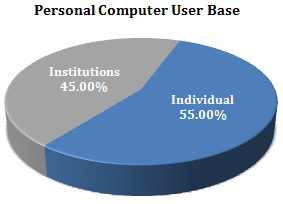 As of June 30, 2015, the Company had more than 5.8 million active licenses under desktop/personal computers solutions.

IT Security in Enterprises

Corporate spying and hacking have encouraged organization as well as individual users to spend more on sound and secure network infrastructure. Business verticals which have higher dependency on Internet and those with sensitive information such as banking & financial services, telecom, and the government are prioritizing IT security in terms of their annual expenditure.

According to Quick Heal IPO document, in 2013, the IT security market was valued over Rs. 5,000 Cr. On account of rapid adoption of security solutions and services by enterprises of all sizes; this value is expected to cross Rs. 8,000 Cr. by 2017.

The market for security software solutions is intensely competitive. Competition is coming from both international and Indian companies such as Symantec, Trend Micro, Kaspersky, McAfee, Sophos, Fortinet, Watchguard, Apps Daily, Syska and K7.

Low-priced or free competitive products – Security protection is increasingly being offered by third parties at significant discounts or, in some cases is bundled for free.  Many antivirus companies have tied up with the manufacturing companies to provide pre-loaded antivirus on smartphones, laptops, notebooks etc.

Also, there are competitors like AVAST and AVG which provide several free products to acquire users, especially those who are sensitive to pricing particularly in India.