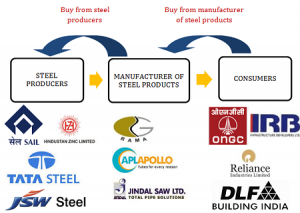 The steel sector as a whole is witnessing an unprecedented turmoil mainly on account of slowdown in China which remains the major producer and consumer of Steel. Of the ~ 1550 million tons of steel produced worldwide ~ 48% is both produced and consumed in China. Notice the geographical distribution and the pattern of use for steel. 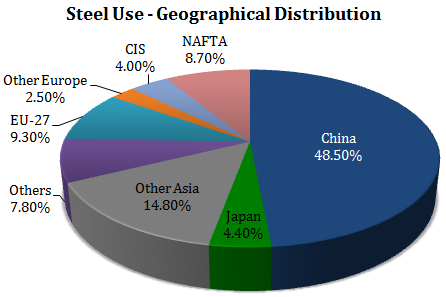 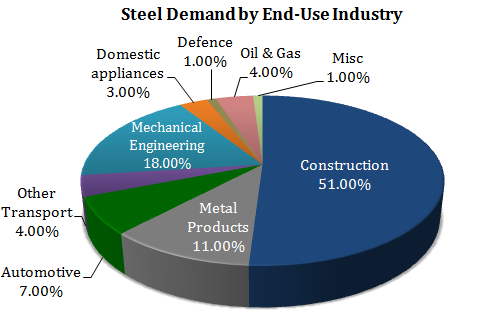 This slowdown has caused an oversupply of steel at a global level and substantial price erosion in steel stocks. Under the circumstances, it is reasonable to bargain hunt in this space particularly for those who can ‘buy and hold’ until there is revival in economic activity. Take into account that slowdown in steel prices affects different players within the steel industry very differently.

How Does Slowdown Affect Various Players? 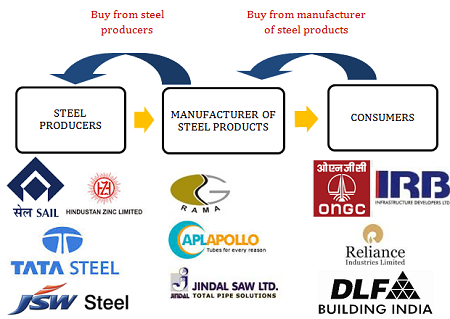 An oversupply in steel or any other commodity is caused due to demand slowdown or when demand does not match up to what was anticipated. This leads to softening of prices as production/ mining overshoots consumption.

Slowdown in prices is great news for consumers as their margins improve on account of cheaper raw material. The negative impact of this is felt by manufacturers of steel products who compete with each other. Again, this is not as severe as it is for steel producers. The reason is simple, manufacturers work on margins; i.e., they buy steel at price X and sell the finished goods at price X+Y where Y is their profit margin.

Note: Manufacturers of steel products typically store finished inventory for anywhere between 30-60 days. As consumer demand falls, they are the first ones to take a hit in profitability margins as they sell their inventory at lower prices than what they had anticipated at the time of purchase of steel. Alternatively, as demand rises, they witness sharp improvement in profitability margins as they sell products manufactured using cheaper steel.

Incorporated in 1974, Rama Steel Tubes Limited (“Rama Steel” or the “Company”) manufactures Galvanized Iron (GI Pipes) which are typically used in water, sewage, and oil and gas transmission and are also put to various uses in the infrastructure sectors. The company got approval for NSE listing on 17 August 2015 and BSE listing on 1 September 2015 and was formerly listed on the Delhi Stock Exchange (DSE). The Company operates through 3 manufacturing facilities:

150% Capacity Expansion – Rama Steel recently added one more plant at Khopoli, Raigad, Maharashtra, which commenced commercial production in June 2015. The Company has also acquired 20 Acre of land at Khopoli, sufficient to have capacity to manufacture around 30000 MT pipes/tubes p.m. Overall, the company plans to increase its installed capacity to 3,40,000 MT per annum with a 2,05,000 MT per annum capacity addition being made at the Khopoli plant.

It is targeted for the new capacity to come into production in FY 2017.

Assuming that the production increases in line with expansion in capacity, the Company could (potentially) report sales turnover of Rs. 490.25 Cr. Further, assuming that the company manages to cut transportation and logistics cost by being located closer to the port (at the Khopoli plant), the expense component could reduce by up to 20% (of the selling and distribution expenses). This translates to ~ 14% reduction in the overall expense. This could increase profitability from Rs. 0.6 Cr to Rs. 8.7 Cr by 2018.

Note that for such capacity expansion the company will need to change their capital structure and either take more debt or sell equity. Promoters currently hold 74% equity in the Company.

In April 2015, the Company set up M/s RST International Trading FZE, a wholly owned subsidiary company in Dubai with the objective of opening up avenues for more International business in steel products. Rama Steel already has active operations in UAE, Sudan, Ethiopia and Ghana. The Company anticipates that its Dubai footprint will serve as stepping stone in reaching other markets in European and African nations. As per company’s latest investor presentation (unaudited) during the 5 month period (April – September 2015), the subsidiary has carried out export orders worth more than US$ 1 million.