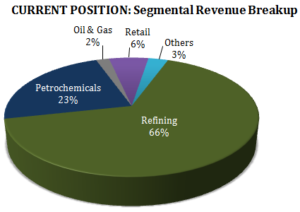 Reliance Industries (“Reliance” or “Company”) operates across a large value chain of energy (spanning Exploration and Production, Refining and Marketing and Petrochemicals) and in consumer businesses (Telecom and Retail) and other businesses like textiles, SEZ development and Media. 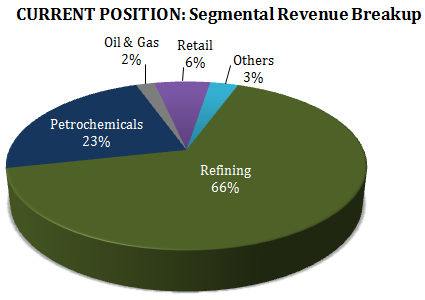 Reliance Industries derives 66 % of its revenue from refining and marketing segment. Refining business is inversely related to crude oil prices. For FY 2016, the Company’s operating profit from refining segment increased by 49.1 %. Reliance’s Gross Refinery Margins (GRM) for the year stood at $ 10.80/bbl as against $ 8.60/bbl in the previous year.  For FY 2016, EBIT margin has improved to 16.0% from 9.95% on the back of GRM improvement by 25.6% as compared to previous year.

According to the Company’s presentation May 2016| Reliance posted highest GRM at $10.8 per barrel which is one of the highest recorded among other refiners. Reliance owns and operate the world’s biggest state-of-the-art single-location refinery, where they are able to convert the last ounce of crude into finished product. Reliance refinery currently has an average complexity of 12.6, while BPCL’s Bina refinery has close to 9 and HPCL’s Bathinda unit has a complexity of 8.

*A complex refinery is one with an ability to process heavy or very low quality crude that can be sourced cheaper than light or good quality crude and be processed into fuel.

The Company’s Oil and Gas segment revenue for the same year decreased by 34.7% to Rs. 7,527 Cr and EBIT declined by 88.1% to Rs. 378 Cr because of lower oil and gas price realizations and decrease in domestic upstream volume. U.S. shale operations were also impacted by low commodity prices.

Over the last quarter, however, crude oil prices have started to creep back up again, rising to ~U.S. $50 per barrel. This could put pressure on refining margins and profitability for the quarter ended June 2016.

Over the years, the Company has enhanced its presence across various sectors. Reliance Retail operates 2,621 stores across 200 cities, Reliance Trends now operates over 271 stores and Reliance Digital operates over 1748 stores.

Going forward, Reliance is poised to increase its reach to customers through rollout of online stores for fashion and lifestyle, and grocery verticals. It is expected that combined physical and online business would help sustain Reliance’s leadership in retail segment in the coming years.

In 2015, the Company announced launch of 4G -based service. The Company has invested over Rs. 1,50,000 Cr. in its 4G internet and telecom venture, Jio, making it one of the largest startup venture anywhere in the world. The biggest hurdle that Reliance Jio will face to have its market presence is that Jio is completely 4G based services but there is neither strong infrastructure nor evident demand for this service. Already, Airtel, Idea and other competitors are offering the same 4G service. Reliance Jio will also have to struggle to source its customers who will be willing to pay for the premium price for its 4G services.

Note: The share price of telecom companies like Airtel and Idea have fallen by 13.11% and 38.83% respectively over the last 1 year.

Also Read: Are Telecom Stocks Heading for a Crash?

Too Much Unrelated Diversification

Reliance Industries is a perfect example of Diworsification, a term coined by the legendary investor Peter Lynch in his book One Up on Wall Street, where he suggested that a business that diversifies too widely risks destroying their original business because management time, energy and resources are diverted from the original investment.

The Company has expanded its business portfolio in too many unrelated divisions. Currently, Reliance is into refining, Oil exploration and production, retail and more recently telecom.