A few days back someone, allegedly from one of the most reputed financial newspaper called me for my views on cement stocks. It was a cold call but at least inspiring that I had reached a point where my views were sought by the media.

His question was simple – Going forward, what is your outlook on cement sector?

Basically, I had to tell him whether cement shares as a whole will go up or down in the next few hours, weeks or months. In such situations it often becomes difficult to not commit. I tried my best and came up with an answer.

Yes the Government is likely to build roads, bridges and buildings; it’s not going to happen overnight. To the extent, an expectation of all that happening was to drive share prices higher,  that already happened when the results of the general elections were announced. I mean, did anyone doubt that a strong government with an emphasis on infrastructure and highways will be good for cement companies? I think cement stocks have run up beyond what they should have, purely on sentiment. It will take a few quarters for earnings to improve and get reflected in financials.

I don’t think that the enquirer was happy with my views. I know this because he did not publish my views anywhere. 1 month later cement stocks, across the board are 5-10% down. Though I must admit that on the day of his call and for a bit after that, they did briefly rally 5-10%.

This is the only truth here – Cement had suddenly become ‘Flavor of the Month’. Everyone in finance media, from TV to newspapers, to magazines and portfolio managers started talking about cement stocks. For the most enthusiastic investors, who take heavy doses of finance news, cement almost became a state of mind.

I realized something interesting.

In the short term, well placed media people are likely to do far better, as portfolio managers. I realized another thing – When you get a call like that, ask a counter question – “Really, cement? Is that what you are all talking about?”

In the short term, this is likely to succeed, but how frequently if at all should you indulge in sector rotation?

8 out of 10 times, sector rotation or buying shares of companies in a particular sector (and abandoning others) will result in short term losses. The reason is simple, it’s like chasing a shadow, news-makers and their distributors will always be a step ahead of you. If you can anticipate the news before news-makers and can position yourself in the sector before them, you will make money. If not, don’t even try. Enterprising businessmen along with media could really influence your vote and decisions. Has this not happened before?

The game is simple, as it has been for centuries. Position yourself by buying into certain stocks. Then, market those stocks. When others start buying, quietly exit and start positioning yourself in yet another out-of-craze sector. Then – Repeat! These days, this happens at a well managed institutional level.

So really, sector rotation works only for those who rotate well before others hear about it. The rest are just chasing shadows.

Can you make money from Sector Rotation?

Sure you can. But you must do one of the 2 things correctly for that:

Now, if you cannot do the 2nd, there are 3 further rules to be correct with the first rule: 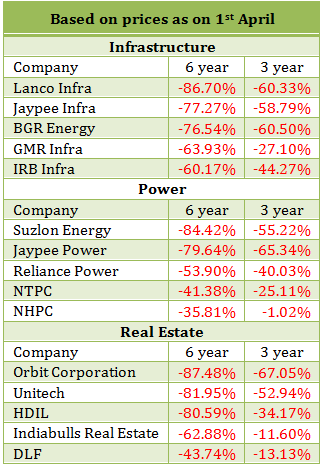 We did a bottom down study of companies in these sectors ignoring power companies (for the time being) for the reason that no matter what the Government did, it will take a long time for things to improve for shareholders of these companies, given the amount of debt on their books. On the 25th of March, we came out with our monthly recommendation of Bharat Electronics Limited (for reasons mentioned in the report here). The stock doubled within 2 months from then.

To go back to the point A above, ideally, you should have sold it by end of June when literally every fund house and every media channel started talking about the defense theme.

The important takeaway and what you should think about at any point of time – What sector will be the flavor of month in 2-3 months from now?

There is absolutely no fixed science around this. For sure, popular media is not the right place to get ideas in this regard. Anticipation of future should be differentiated with speculation about future. The former is based on some level of study and research. Couple this with the fact that your starting point should be beaten down sectors or industries.

I remain very bullish on the power sector, despite the high levels of debt and despite the long gestation periods and delays. Again, you must be very careful before getting stock specific and must have some time horizon in mind.

In the comments section below, you can share your thoughts on themes and sectors which you think will do well in future.