Shipping Corporation of India (“Shipping Corporation” or the “Company”) is a Government of India undertaking and owns and operates around 38% of the Indian shipping Industry (- i.e. 38% of tonnage capacity in India), and has operating interests in all areas of shipping business; servicing both national and international trades. Shipping Corporation’s owned fleet includes Bulk carriers, Crude Oil tankers, Product tankers, Container vessels, Passenger-cum-Cargo vessels, LPG / Ammonia carriers and Offshore Supply vessels.

Shipping Corporation’s shipping operations can be broadly classified into 3 categories:

[1] Bulk Carrier & Tanker Services – Major revenue of the Company comes from this segment which comprises of 54 ships.  This Division generates about 71% of the revenues.  The operations of this division can be further classified into following activities:

The Company operates with fleet exposure to all segments like bulk, container, tanker and offshore which helps it in creating a cushion to deal with slowdown within different segments. Shipping Corporation has 69-vessel fleet with a total capacity of 5.89 million DWT*, of which 70 % are tankers.

Also, as the prospects for global economy improves, oil trade demand (both crude and product) will gain support from low oil prices and changing trade patterns are expected to support positive earnings.

*DWT – Known as Deadweight tonnage or tons deadweight (TDW) is a measure of how much weight a ship is carrying or can safely carry; it does not include the weight of the ship.

Fleet Profile of the Company

Increased focus on energy-related transportation (crude oil) provides significant opportunities for growth. Recent softening of crude oil prices has benefited shipping companies because of higher use of tankers, particularly as India and other oil importing nations are making efforts to build a long term oil reserve. The tanker division of the Company is expected to continue benefiting from growth in India’s oil refining industry, which requires increased crude oil imports and refined oil exports.

Over the past few months oil producers and traders have hired tankers as storage facility, speculating to benefit in case of a recovery in oil prices. This has in turn improved utilization levels of tankers. This positive outlook is expected to continue in the near term on the back of low crude oil price.

Over the last four years, Shipping Corporation has increased its focus on adding newer vessels with higher tonnage carrying capacity. The Company has incurred a capital expenditure of approx. Rs. 7,000 Cr. to acquire new vessels to replace its ageing fleet. This has resulted in an improvement of its fleet’s average age to 9 years in FY 2015 compared to 18 years in FY 2007. Due to this strategy, its net asset value has seen a significant increase over the last few years in which the company reported losses.

Shipping Companies require huge capital expenditure to own and manage their fleet size. Further, given the aggressive expansion plans undertaken by the Company, the debt to equity ratio of the Company has remained at high levels for the past several years. The increased finance costs and other fixed costs have also had an impact on the growth of net profit, in spite of high EBITDA growth.

The Company operates with a debt to equity ratio of ~1.05 times and has not declared any dividends in the past 4 years.

The shipping industry is cyclical in nature and depends on economic or business cycles. The industry is largely driven by market forces i.e. supply of tonnage & demand in world trade. This trade is dominated by the developed and the developing economies, primarily China, Euro Zone and the U.S. The recent slowdown in China could have a major impact in world trade. While so far, shipping has remained unaffected on this count, as Chinese producers are exporting goods and commodities at lower rates, a prolonged slowdown could result in deceleration in the import activity originating from China.

The Company faces competition from both domestic (government + private) and foreign players.

Some of the listed players in the shipping industry: 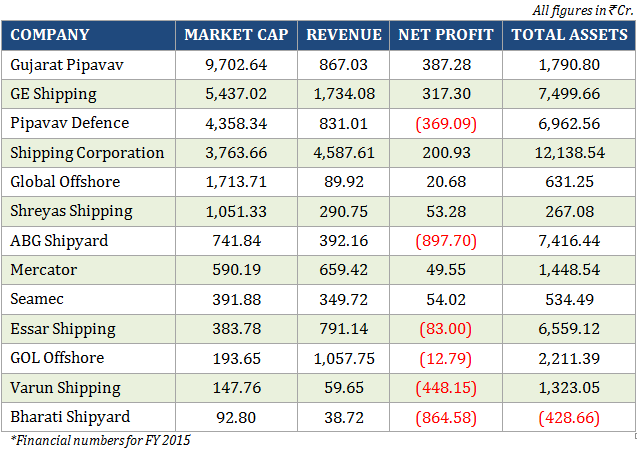