This article is based on a subscriber query on ‘investment potential in Siti Cable Network’.

View: I have no views on this. 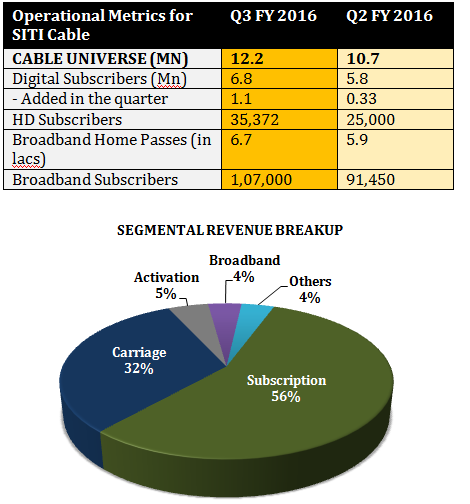 The broadband business offers multiple synergistic benefits to MSOs by allowing them to leverage their existing infrastructure and consumer base. Broadband business offers higher average revenue per unit and margins than digital cable to MSOs. Given the low penetration of internet in India, the broadband segment is an attractive growth opportunity. To tap this opportunity, the Company is planning to expand broadband operations across pan India in the coming years to increase its current subscriber base significantly. Siti Cable currently offers broadband at speeds up to 100 Mbps on state of the art DOCSIS 2/3 Technology in Delhi/ NCR and West Bengal.

Siti Cable has strong headroom for digitization in phase III/IV of its existing customer base compared to its competitors.

Further, the Company as part of its growth strategy has entered into strategic partnerships with regional MSO’s in Maharashtra, Gujarat and Odisha for phase III/IV expansion.

An increase in promoter stake is a strong reaffirmation by the insiders, who are the first recipient of any information and knowledge, that there is greater potential value in the business than what the market is paying for it.

THE COMPANY’S DEBT POSITION IS MORE THAN WORRYING.

The television distribution is highly competitive and is often subject to rapid and significant changes in the marketplace, technology and regulatory and legislative environments. Strongest cable competitors include Hathway, Den, and InCable. All three of these competitors have a presence in several cities across India. DTH companies that compete include TataSky, DishTV, Airtel Digital TV, Videocon D2H, Sun Direct TV and BIG TV.