Should You Start Buying Oil Stocks? – Look For These 3 Things 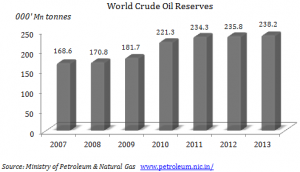 Next time when crude oil price hits U.S. $ 90 / barrel mark, it may well be attributable to “the risk posed by the emerging markets of India, China and Brazil, where increasing affluence resulted in more and more mid income consumers to become automobile owners.”

Over the last few days, I must have read at least 20+ articles where increasing U.S. shale oil production is blamed for the current oversupply in the oil markets. Certainly, this increase did not happen overnight. Did no one see the American shale oil boom 12 months back?

Further, the United States never really praised Russia’s intervention in Ukraine. 12 months back, did any conspiracy theorists forecast that U.S. may collude with OPEC to cause the current oversupply to punish Russia? In hindsight, it is easy to reason.

Why So much Oil?

The truth is that there had always been enough oil to last for a very long time and the fear about the world running out of oil had always been unfounded. In fact, if all the proven oil reserves are to be actually consumed within the next 50-100 years, we may actually die of air pollution before anything else. 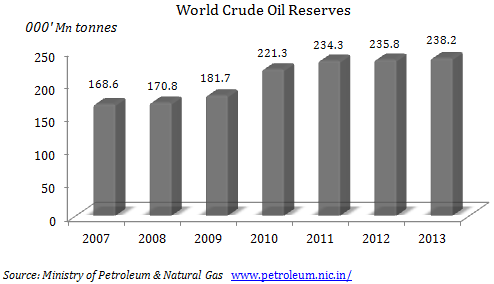 Organization of the Petroleum Exporting Countries or OPEC countries supplies a major portion of crude to the rest of the world. This gives them an amazing ability to control international prices.

They could drill out more or less based on international demand. To keep a larger share of the world market some of these countries drill out more (from time to time) and sell it at rates cheaper in comparison to their competitors to win or retain customers. This is exactly the reason given by Saudi Arabia for not cutting supply. Their logic is that irrespective of whether they cut supply, there will be enough oil for price to take a beating. Since none of the other OPEC member countries are going to cut supply they will not cut back on their production. This has resulted in a sharp decline in the price of crude oil.

What Sectors Benefits from Cheap Oil?

Investors around the world are looking at sectors that will benefit from cheap oil. Automobiles, chemicals, plastic, leather and emulsion industry are all likely to benefit as their raw material / input costs come down. If you are one of those who are still buying into these sectors – good luck! Be assured, institutions much bigger factored this long before the oil collapse. Most of them may well be trying to exit these sectors after riding the recent rally.

Why Exactly is No One Buying Oil Stocks?

Most oil exploration companies are available at a significant discount. Further, if you calculate their current dividend yield and accumulated reserves – this may well be a great opportunity to buy these stocks for long term. Of course stocks in this sector could go down further if oil declines more from here, but isn’t that always true? Based purely on the law of averages (and not technical trends) now that oil is down over 60% from its peak, how much more could it fall, another 5% as Goldman Sachs predicts? So what if it does? If Oil stocks could withstand U.S. $115 to U.S.$ 45, why worry now?

Surely OPEC is not going to start supplying free oil to the world.

I guess it’s the fear factor. Those who were buying oil stocks at their peak based on fundamentals are now apprehensive of buying the same stocks at 40-60% discount and this time it is not for the want of cash. In most cases, investments are on. It’s just the fear of oil – nobody wants to catch a falling knife.

What’s The End To This?

Whether you believe in a ‘genuine oversupply situation’ or in the whole ‘Punish the Russians’ theory, either ways, prices will not be sustainable anywhere below U.S. $ 90/ barrel for a longer duration.

All OPEC members need crude oil price to be above U.S. $ 90 to meet their internal expenses i.e. to balance their budgets. If crude oil stays where it is right now i.e. at U.S. $ 45 level, they must either start exporting other gods or services or cut back substantially on their internal consumption. Of course it would be a hell of a lot easier to somehow sell oil at a higher price. Can they control the price at which oil trades? 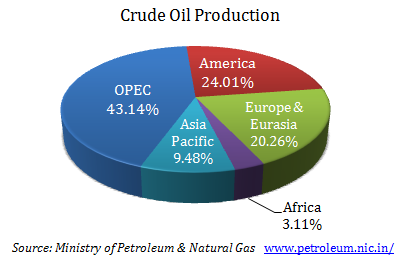 While it may seem like U.S. shale oil boom is the end to all problems for the world. OPEC and in particular its Middle East members still produce a majority of the oil being consumed in the world. Further, shale oil is extracted by using the technique of fracking which makes it more expensive than the oil from Middle East.

When are we likely to see the prices bottoming out is anybody’s guess buy I find little reason to believe that OPEC will not cut production when it meets again in the first week of June.

Oil Stocks – 3 Things to Look For

All upstream – oil exploration and production companies are of interest with crude at these levels. Focus on 3 things when looking for oil stocks in the current environment:

1. Decline in volumes – Let’ face it – at U.S. $ 45/ barrel, it’s not coming out of the earth. Look for companies where production (i.e. extraction) has declined – in terms of volume of oil extracted and not the monetary realization. Companies which have ample cash reserves and whose management does not care much for the share price (which is how it should be) will use this time to focus on areas other than exploration.

2. No new oil discoveries – Oil companies are constantly exploring for new possibilities. Look for companies which have made unusually little noise about any increase in their proved or probable reserves. Compare how many new discoveries were announced in previous periods vs. now. Typically, in such environment exploration peaks.

3. Focus on maintenance – Oil blocks, reservoirs and pipelines all require periodic maintenance. Depending on the size of these blocks, they have to be shut down every 3-4 years from anywhere between 2-6 months for maintenance and cleaning. Companies which are using this period as down time are likely to bounce back faster when oil prices recover.

Once the price of crude oil starts appreciating, these 3 factors will start reversing. Markets will be surprised at how fast pessimism turns into over-optimism. Start investing in oil exploration.

We are nowhere close to finding a suitable alternative to oil.